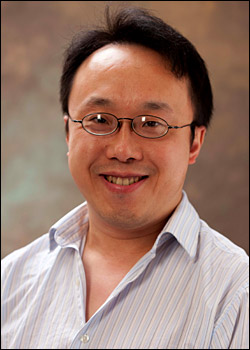 UPTON, NY — Ya Ha, an associate professor of pharmacology at the Yale University School of Medicine, will give a talk titled “A Step Closer to Understanding Alzheimer’s Disease” at the Laboratory’s Berkner Hall on Thursday, November 10, at 4 p.m. Sponsored by Brookhaven Women in Science, the public talk is free, and no registration is required. All visitors to the Laboratory age 16 and over must bring a photo ID.

Ha will explain that genetic mutations in presenilin are known to cause Alzheimer’s disease. Presenilin is a protein that uses water to break membrane proteins inside the water-excluding environment of a cell’s lipid bilayer — a barrier that keeps ions, protein, and other molecules where they are needed in a cell and prevents them from migrating to areas where they are not needed. How presenilin catalyzes this highly unusual reaction is yet unclear. Many researchers think that a product of the reaction, amyloid beta peptide, is toxic to neuronal cells and thus directly responsible for causing Alzheimer’s disease. Knowing the atomic structure of presenilin would help to solve this puzzle and to explain the mutations that cause the disease. So far, this has been difficult to achieve experimentally.

Ha and his team took an alternative approach. They used x-ray crystallography to determine the atomic structure of FlaK, a protein that is a close relative of presenilin. Knowing FlaK’s atomic structure will help to shed light on presenilin’s shape and function, which in turn could reveal new opportunities to treat or prevent early-onset Alzheimer’s disease.

Ha earned a B.S. in biochemistry from Nanjing University, China, in 1992 and a Ph.D. in biophysics from the University of Minnesota in 1998. He was a postdoctoral fellow at Harvard University from 1998 to 2001, and in 2001 he joined the faculty of Yale University. In addition to his position as associate professor, he is the director of the Macromolecular X-ray Crystallographic Facility, Yale University School of Medicine.