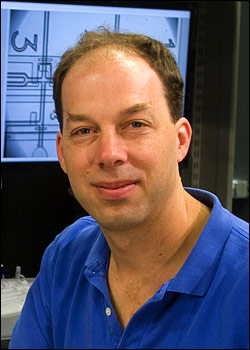 UPTON, NY — Stephen Quake, Professor of Bioengineering, Physics and Applied Physics at Stanford University, will give a BSA Distinguished Lecture titled "Precision Measurements in Biology" in Berkner Hall at the U.S. Department of Energy's (DOE) Brookhaven National Laboratory on Wednesday, November 30, at 4 p.m. BSA Distinguished Lectures are sponsored by Brookhaven Science Associates, the company that manages Brookhaven Lab, to present topics of general interest to the Laboratory community and the public. The lecture is free, and no preregistration is required. All visitors to the Laboratory age 16 and older must bring a photo ID.

In his lecture, Quake will argue that both physics and biology can be tied together by the use and consequences of precision measurement. The elementary quanta of biology are the macromolecule and the cell. He will describe how precision measurements have been used to explore the basic properties of these quanta, and more generally, how the quest for higher precision almost inevitably leads to the development of new technologies, which in turn catalyze further scientific discovery. According to Quake, there are no experimental barriers to biology becoming a truly quantitative and mathematical science.

From Galileo's time to the present, physicists have measured fundamental phenomena with increasing precision, and in the process, have discovered more and more about the way the physical world works. Quake approaches biology in the same way, and his precision measurements have enabled him and his team to develop two groundbreaking technologies — the biological equivalent of a integrated circuit, called microfluidic large scale integration, and ultra-high throughput DNA sequencing technology.

Quake's development of the "microfluidic chip" allowed scientists to conduct research on the unusual physics of fluids in small volumes, paving the way for new discoveries in pharmaceuticals, prenatal testing, and other genetic applications. Quake's DNA sequencing technology, which has been commercially developed, made it possible to demonstrate the first single-molecule DNA sequencing. In 2009, Quake used his own technology to sequence his genome, becoming the eighth person in the world to have his entire genome sequenced, and the first to use his own technology to do so.

Stephen Quake earned a B.S. in physics and an M.S. in mathematics, both in 1991 from Stanford University, and he received a Ph.D. in physics from Oxford University in 1994. He then returned to Stanford as a postdoctoral fellow in physics, advised by Steven Chu, who is currently the DOE Secretary. In 1996, he joined the California Institute of Technology as an assistant professor of applied physics, and he worked his way through the ranks to become Thomas E. and Doris Everhart Professor of Applied Physics and Physics in 2004. In 2006, he joined the Stanford faculty, and in 2008, he rose to his current position as Lee Otterson Professor of Bioengineering and Applied Physics and investigator at Howard Hughes Medical Institute.

A fellow of the American Physical Society and the American Institute for Medical and Biological Engineering, Quake has received numerous awards, including The American Physical Society's Apker Award in 1991, a National Science Foundation "Career" Award in 1997, the National Institutes of Health Director's Pioneer Award in 2004, the Royal Society of Chemistry Publishing Pioneer of Miniaturization Prize in 2010, and the Raymond and Beverly Sackler International Prize in Biophysics in 2011.

In 2002, Quake was named one of the "100 Young Innovators Who Will Create the Future" by the Massachusetts Institute of Technology's Technology Review and by Forbes magazine as one of "15 People Who Will Reinvent the Future." Also, Popular Science magazine chose Quake as one of the "Brilliant 10" in 2003, and he was named among the "'Power 100' Most Powerful Men" in 2010 by Men's Health magazine in the United Kingdom.