Bestselling Author Dava Sobel to Speak at Brookhaven Lab on 'How Copernicus Revolutionized the Cosmos,' December 15 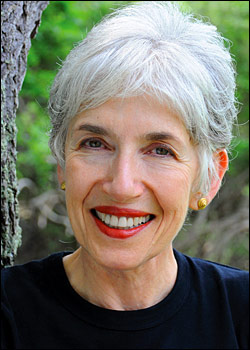 UPTON, NY — Dava Sobel, an award-winning author and former science reporter for The New York Times, will give a talk titled “A More Perfect Heaven: How Copernicus Revolutionized the Cosmos” at the U.S. Department of Energy’s Brookhaven National Laboratory on Thursday, December 15, at 7 p.m. in Berkner Hall. Sponsored by Brookhaven Women in Science, the talk is free and no registration is required. All visitors to the Laboratory age 16 and older must bring a photo ID.

In the talk, Sobel will discuss her recently published book, which bears the same title as her lecture. By 1514, the Renaissance astronomer Nicolaus Copernicus had a written outline of his then-considered “crazy” theory that the Sun — not the Earth — was the center of the universe. For the next three decades, Copernicus expanded his theory through hundreds of observations and compiled a secret manuscript that explained his theories, but he refused to publish it for fear of ridicule.

In 1539, a young German mathematician, Georg Joachim Rheticus, traveled to Poland to convince Copernicus to publish his “secret” manuscript, which mathematicians and scientists throughout Europe had heard about. In 1543, Copernicus agreed to publish his work on his heliocentric theory, which is now heralded as the beginning of modern astronomy and the scientific revolution.

Sobel will describe the conflicting personalities and extraordinary discoveries that shaped the Copernican Revolution. She will also discuss her play — included in her book on Copernicus — in which she imagines Rheticus’s struggle to convince Copernicus to publish his unorthodox manuscript.

During her 30-year career as a science journalist, Sobel has written for such magazines as Audubon, Discover, and The New Yorker. She is an international bestselling author with six books to her name. Her book Longitude won several literary prizes, including the Harold D. Vursell Memorial Award from the American Academy of Arts and Letters and the 1997 “Book of the Year” in England. A “NOVA” documentary based on Sobel’s book Galileo’s Daughter won an Emmy, and the book was a Pulitzer Prize finalist.

A 1964 graduate of the Bronx High School of Science, Sobel received her B.A. from SUNY Binghamton in 1969. She holds honorary doctor of letters degrees from Middlebury College in Vermont, and the University of Bath, England.

Among her numerous honors, Sobel received the 2001 Individual Public Service Award from the National Science Board “for fostering awareness of science and technology among broad segments of the general public.” Also in 2001, she received the Bradford Washburn Award from the Boston Museum of Science for her “outstanding contribution toward public understanding of science, appreciation of its fascination, and the vital role it plays in all our lives.”

Sobel’s lecture engagements are numerous, and have taken her to such prestigious venues as The Smithsonian Institution, The Explorers’ Club, and The New York Public Library. She is also a frequent guest on National Public Radio programs.

Call 631 344-2345 for more information about the lecture. The Laboratory is located on William Floyd Parkway, about one-and-a-half miles north of Exit 68 of the Long Island Expressway.