The following news release was issued by the European Synchrotron Radiation Facility (ESRF), in Grenoble, France. Vincent De Andrade, at the U.S. Department of Energy’s Brookhaven National Laboratory, is a coauthor on the paper described in the release. An earth scientist, De Andrade joined Brookhaven Lab in 2010 to help develop SRX, a state-of-the-art spectroscopy beamline at Brookhaven Lab’s National Synchrotron Light Source II, now under construction. According to De Andrade, SRX will be able to provide high-resolution and high-precision chemical images of rocks, from which geodynamic models of the primitive Earth will be derived. 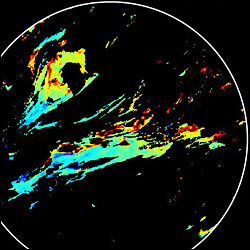 Cartography of iron species within a sample of ore. Close-up of a region identified as chlorite, mapping Fe3+/Fetotal.

Plate tectonics in its current form is believed to have started one billion years ago. A study of two billion year old rocks from African gold mines has now shown that the same process of subduction we observe today as a by-product of these large-scale continental movements, was already present on Earth more than two billion years ago. Experiments with X-rays at the ESRF have contributed to this discovery which has been published on 20 November 2011 in Nature Geoscience.

The study was performed by an international team of scientists led by J. Ganne of the University of Toulouse and included scientists from Brookhaven National Laboratory (BNL), Monash University in Melbourne, the Universities of Cambridge, Grenoble, Lausanne and Ouagadougou, and the ESRF.

Some fifty years ago, plate tectonics, motions of large parts of the Earth's surface against each other, became a generally accepted theory to explain continental drift, along with many volcanic and earthquake zones, and seafloor spreading. The exact origin of the forces driving these large-scale movements of the continental plates is still a matter of scientific debate.

Today, some eight large plates move against each other and experience so-called plate subduction at their boundaries. In these subduction zones, one tectonic plate moves under another, lowering itself into the Earth's mantle. This is a slow process at a rate of a few centimetres per year. The shape of the continents suggests that 250 million years ago, the Earth’s land masses were united in a single continent, called Pangaea, from which today’s plates started to move away.

The high pressure and temperature in subduction zones are the main drivers for chemical elements to accumulate in high concentration in an ore. Metal ore mines therefore are remnants of past subduction events, even if today they are located far away from a plate boundary. The exact composition of the minerals constituting an ore is, like a fingerprint, representative of the pressures and temperatures experienced when the plate sank into the Earth’s mantle. Today, scientists can deduce these values, and their evolution in time, from the crystalline and elemental composition of a given ore.

For this study, the scientists investigated ore mineral samples aged between 2 and 2.2 billion years collected in West Africa in an area rich in gold mines. Using an electron microprobe, they established detailed maps of the spatial distribution of major chemical elements in the samples, notably of iron. However, the iron oxidation state (Fe2+ or Fe3+) cannot be measured with electron microprobes but can vary inside ore-bearing minerals. Thanks to the use of X-ray absorption near-edge spectroscopy (XANES) with a submicrometric beam at ESRF beamline ID21, important variations of the Fe3+ content in the minerals were shown, which had major repercussions for the pressure and temperature calculations. 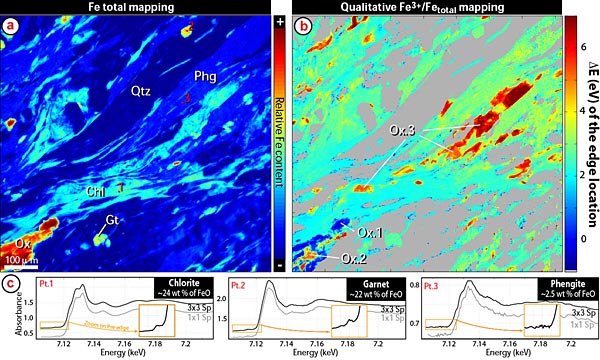 Fe oxidation state inside a complex metamorphic rock. (a) Fetotal and (b) Fe3+/Fetotal mapping of a metamorphic rock made of quartz, garnet, phengite, chlorite, and oxides. Chemical information provided by (a) and (b) reveal three different oxides. (c) Display of three XANES spectra corresponding to three different mineralogical phases (marked in red in (a)) with various Fe content.

These XANES measurements confirmed a theoretical model on the quantity of Fe3+ in the minerals, which implied values for the pressure and temperature at the subduction event 2.2 billion years ago that are very close to those in modern "cold" subduction events. Subduction as we know it today was probably already happening on Earth at the onset of tectonic motion some two billion years ago, despite a much hotter Earth and mantle than today.

The team is already planning to gear up their use of X-rays. In a future experiment at the ESRF, they wish to use a new technique to analyse a large number of even older samples from the Archean age (2.5 — 3.8 billion years ago) formed during several key events in Earth’s history. "Mega-pixel XANES imaging with a sub-micrometric resolution will make it possible to produce large-scale maps of the oxidation states of iron for many different samples. We hope to benefit from these high resolution maps to identify zones in the samples where very early minerals are present even in minute quantities", says Vincent de Andrade from BNL who developed the new technique at the ESRF, "because the proof of the universality of subduction through the ages of Earth’s history cannot rely on our pioneering measurements alone, and because there are still a lot of grey areas to be elucidated in the early history of our planet."