A worldwide organization with 385,000 members in 160 countries, the IEEE is a leading authority on a wide variety of areas ranging from aerospace systems to consumer electronics. IEEE offers Fellowships to members of the organization who have an extraordinary record of accomplishments in any IEEE field of interest. The total number of Fellows selected in any one year cannot exceed one-tenth of one percent of the total voting membership. Smith and Woody are among 329 individuals who have been chosen as Fellows in 2012. 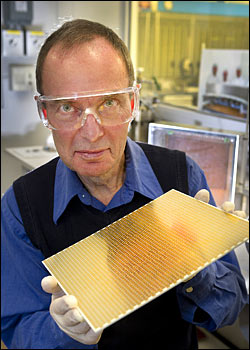 Smith was cited “for contributions to the advancement of detectors for x-rays, charged particles and thermal neutrons.”

“I’m very honored to receive this designation from IEEE,” Smith said. “Throughout my career, I have been fortunate to work with colleagues whose talents have helped in the development of a number of innovative detector concepts, ultimately resulting in better science.”

Smith has made significant contributions to both the understanding and performance of these detectors, with particular emphasis on gas-filled proportional detectors. He has designed state-of-the-art devices that have been used in a wide range of scientific disciplines, including x-ray astronomy, synchrotron science, plasma physics, neutron science, and high energy and nuclear physics.

Among Smith’s accomplishments is measuring the fundamental limits of gas-filled detectors, which enable synchrotron researchers to obtain the highest resolution images possible. He also developed cathode-readout designs that minimize the number of readout channels on detectors, thus reducing construction expense while retaining important experimental features needed in x-ray and neutron detectors, as well as in large particle detectors such as PHENIX at Brookhaven’s Relativistic Heavy Ion Collider (RHIC), and ATLAS at the Large Hadron Collider (LHC) at CERN. In addition, he has built complete x-ray detector systems for several synchrotrons, including Brookhaven’s National Synchrotron Light Source. He also developed neutron detectors that are currently being used in major neutron research facilities in the U.S. and Australia.

Smith earned a B.Sc. in 1970 and Ph.D. in 1974, both in physics, from Durham University, England. Beginning in 1973, he was a research associate at the University of Leicester, England, before joining Brookhaven Lab in 1982 as an associate physicist in the Instrumentation Division. Currently a senior physicist with tenure, Smith received Brookhaven Lab’s Research & Development Award in 1996 and the IEEE’s Long Island Regional Award for Contributions to High Energy Physics in 1998. Smith is a senior member of IEEE and has played major roles in the organization of annual IEEE conferences. 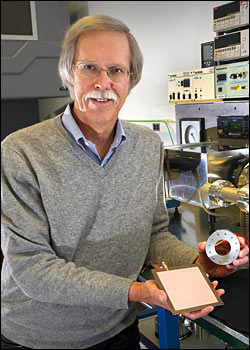 Craig Woody was cited “for the development of radiation detectors for high energy and nuclear physics, and medical imaging.”

“I have been involved with IEEE for most of my career, so it is very satisfying to be honored as a Fellow,” Woody said. “I’m glad that my basic research has led to several significant applications in particle physics and nuclear medicine.”

Many detectors in particle accelerators use inorganic scintillating crystals to convert high energy photons into ultraviolet or visible light. Woody studies how these crystals work and how radiation affects their performance in these detectors. He and his collaborators have worked on radiation damage studies on numerous types of crystals, including some that were planned to be used at the Superconducting Supercollider, which has since been cancelled, and others that are currently in use at the Compact Muon Solenoid detector at the LHC. Woody’s work has helped identify crystals that can survive very high radiation environments in accelerators.

With collaborators from Stony Brook University and the Weizmann Institute of Science in Israel, Woody developed a high-performance gas Cherenkov detector for the PHENIX experiment at RHIC, which is important for physicists to detect electron pairs resulting from heavy ion collisions, a signature of the quark-gluon plasma that is believed to be the type of matter that existed at the beginning of the universe.

In the medical field, Woody and his colleagues developed three patented technologies at Brookhaven: the Compact Conscious Animal Positron Emission Tomography (PET) Scanner, named RatCAP, which can be attached directly to a rat’s head for PET experiments, allowing the animal to be mobile and eliminating the need for anesthesia; a combined PET/MRI Scanner, which is being tested for possible use in breast cancer detection and follow-up treatment; and a PET Wrist Scanner, which non-invasively measures the uptake of a radiotracer in a patient’s blood while undergoing a PET scan.

After earning a B.A., M.A., and Ph.D. in physics at Johns Hopkins University in 1973, 1974, and 1978, respectively, Woody started his career as a postdoctoral research associate at the Stanford Linear Accelerator Center in 1978. A year later, he joined Brookhaven Lab as an assistant physicist. He was deputy group leader, then group leader, for the BNL PHENIX Group, from 1997 to 2001, and 2001 to 2008, respectively. He has been a senior physicist since 2001.

A senior member of IEEE, Woody has served on numerous committees and has held several posts in the organization, including president of the IEEE Nuclear and Plasma Sciences Society, from 2009 to 2010. Woody is also a Fellow of the American Physical Society, and he received an Outstanding Mentor Award from the U.S. Department of Energy’s Science Undergraduate Laboratory Internship Program in 2009.