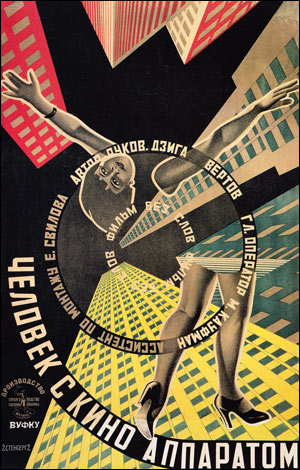 UPTON, NY — The Voxare string quartet will perform Soviet modernist music to accompany a screening of Dziga Vertov's 1929 groundbreaking silent film, “Man with a Movie Camera.” This recital will be held at the U.S. Department of Energy's Brookhaven National Laboratory on Wednesday, January 11, 2012, at noon in Berkner Hall. Sponsored by Brookhaven Science Associates, the company that manages the Lab, the concert is free and open to the public. All visitors to the Laboratory 16 and older must bring a photo I.D.

Documenting urban scenes in Moscow and the Ukraine, the camera captured citizens from dawn to dusk in all aspects of life - mundane, athletic, dangerous, and breathtaking. It perfectly distilled city life of that time, and was enthusiastically received by audiences in Europe and the USA. However, communist party officials were critical of Vertov and over time their support dwindled so that although for a decade he had been, along with Sergei Eisenstein, the leading theoretician of the new art of cinema, by the end of this period his career was effectively over. Six years after his death from cancer, in 1954, French documentary filmmakers incorporated Vertov's theory and practice into their "Cinéma vérité."

In 1984, three New York cultural organizations put on the first American retrospective of Vertov’s work, with seminars and curated screenings of films by his contemporaries and his later followers worldwide. Dziga Vertov was revealed as the most innovative and excitingly free with the new medium, and Man with a Movie Camera did the most to establish Vertov as the greatest of pioneer filmmakers.