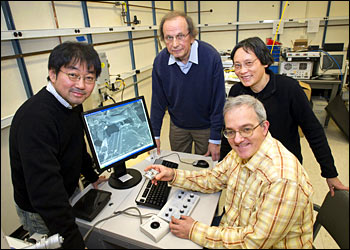 UPTON, NY — N.E. Chemcat Corporation, Japan’s leading catalyst and precious metal compound manufacturer, has licensed electrocatalysts developed by scientists at the U.S. Department of Energy’s Brookhaven National Laboratory that can reduce the use of costly platinum and increase the effectiveness of fuel cells for use in electric vehicles. In addition, the license includes innovative methods for making the catalysts and an apparatus design used in manufacturing them.

Platinum is the most efficient electrocatalyst for fuel cells, but platinum-based catalysts are expensive, unstable, and have low durability. The newly licensed electrocatalysts have high activity, stability, and durability, while containing only about one tenth the platinum of conventional catalysts used in fuel cells, reducing overall costs.

The electrocatalysts consist of a palladium or a palladium alloy nanoparticle core covered with a monolayer – one-atom thick – platinum shell. This palladium-platinum combination notably improves oxygen reduction at the cathode of a hydrogen/oxygen fuel cell. This type of fuel cell produces electricity using hydrogen as fuel, and forms water as the only byproduct.

Radoslav Adzic, the Brookhaven Lab senior chemist who led the team that developed the catalysts, said, “We are delighted that N.E. Chemcat Corporation has licensed our platinum monolayer electrocatalyst technology. We hope that it will facilitate the development of affordable and reliable fuel cell electric vehicles, which would be very beneficial for the environment since they produce no harmful emissions. Also, the use of nonrenewable fossil fuels for transportation that contribute to global warming would be greatly reduced, prolonging their availability for other uses in the future.”

The U.S. Department of Energy’s Office of Science and its Office of Energy Efficiency and Renewable Energy funded research that contributed to these licensed technologies. Besides Adzic, those who contributed to the research include Brookhaven chemists Jia Wang, Kotaro Sasaki, and Miomir Vukmirovic, and postdoctoral fellows Junliang Zhang and Yibo Mo.