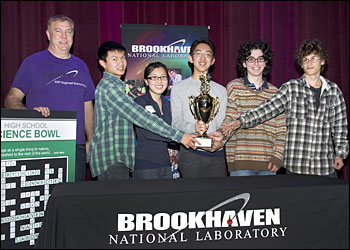 The competition followed a round-robin format in the morning, allowing the teams to compete in four divisions. In the afternoon, division winners faced off in a double-elimination series.

The Regional Science Bowl at Brookhaven Lab is part of the National Science Bowl® competition coordinated by the Department of Energy’s Office of Science. Since its inception in 1991, more than 150,000 high school students have participated in the “Jeopardy”-style contest. Students participating in the competition are encouraged to excel in science and math and to pursue careers in those fields.

Regional champions Ward Melville won $500 and an invitation to participate in the National Science Bowl®, which will be held in Washington, DC, on April 26 – April 30, 2012. The second, third, and fourth-place teams won $250, $125 and $100, respectively. All students received a Science Bowl T-shirt.