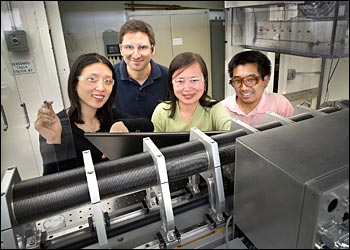 A new x-ray microscope probes the inner intricacies of materials smaller than human cells and creates unparalleled high-resolution 3D images. By integrating unique automatic calibrations, scientists at the U.S. Department of Energy’s Brookhaven National Laboratory are able to capture and combine thousands of images with greater speed and precision than any other microscope. The direct observation of structures spanning 25 nanometers – or 25 billionths of a meter – will offer fundamental advances in many fields, including energy research, environmental sciences, biology, and national defense.

This innovative full field transmission x-ray microscope (TXM), funded by the American Reinvestment and Recovery Act, was developed and commissioned at Brookhaven Lab’s National Synchrotron Light Source (NSLS), which provides the x-ray source needed to capture images on the nanoscale. A new paper published in the April 2012 Applied Physics Letters details the experimental success of a breakthrough system that rapidly combines 2D images taken from every angle to form digital 3D constructs.

“We can actually see the internal 3D structure of materials at the nanoscale,” said Brookhaven physicist Jun Wang, lead author of the paper and head of the team that first proposed this TXM. “The device works beautifully, and it overcomes several major obstacles for x-ray microscopes. We’re excited to see the way this technology will push research.” 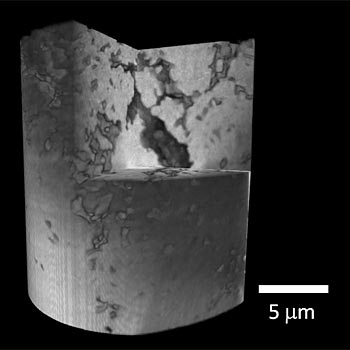 Wang’s team examined, for example, a 20-micrometer electrode from a lithium-ion battery – as thin around as a human hair. The internal interaction of pores and particles determines the energy performance of the battery, and examining that activity requires precise knowledge of the nanoscale structure.

Wang’s team took 1,441 2D pictures of the electrode as a machine rotated the tiny material specimen to capture every possible angle. The challenge then becomes converting those separate images into a single 3D structure – one in which every nanometer makes a difference. On this scale, the usual one-micron wobbles are similar in scale to taking a portrait and having the subject leap several feet to either side.

Before this new system, scientists had to manually align every single image or use software to slowly interpret the shifts. This had two major limiting effects on the process: first, the sample has to have sharp internal features or be marked to provide guidelines, which can limit material types; and second, manual alignment demands so much time that the total image count peaks in the hundreds. Brookhaven’s TXM changes that.

For the first time, the specimen is mounted on top of a platform with three sensors that measure nanometer shifts in any direction as the battery rotates and the microscope takes pictures. The computer recording the images, after calibration using a gold sphere, then automatically compensates for any shifts and accurately assembles the images into the final three-dimensional construct. The entire process takes only four hours, and that owes more to the x-rays available from NSLS than the microscope or computer.

The future of 3D

Brookhaven’s National Synchrotron Light Source II (NSLS-II), scheduled to come online in 2015, will exploit the capabilities of this TXM on an even more radical scale. Imaging that lithium-ion battery took 10,000 seconds on NSLS, but with the new light source’s higher beam flux, or x-ray brightness, it will be 1,000 times faster, dropping that time to only 10 seconds.

In addition to direct structural observation, the TXM will also advance elemental and chemical understanding of materials. Maintaining constant magnification during spectroscopic imaging, which examines the unique ways that matter interacts with radiation, scientists will be able to identify the individual chemical configurations within samples. Research is currently under way by Wang’s team to demonstrate this capability.

Nanoimaging for industry and national security

The TXM was purchased with support from the American Recovery and Reinvestment Act, designed to spur economic activity and create jobs. Xradia, a California-based company that specializes in 3D x-ray microscopy, built the new device. Brookhaven Lab physicists worked in close collaboration with Xradia engineers, explaining their specific research goals and performance needs.

“This has been a very successful collaboration, and Xradia has been our critical partner in this project,” said Wang. “We are still in frequent contact to provide them with feedback on the microscope’s performance, so that future design innovations can be made.”

While the focus for the new TXM will likely be on alternative energy fuels and storage solutions, the fundamental insights have already been applied to plant root structures, catalysts, and advanced electronics. The demonstrated success of the 3D imaging system has already attracted the interest of commercial users, with major corporations such as UOP and IBM scheduling time at the TXM. The Defense Advanced Research Projects Agency (DARPA) also plans to use the new microscope to probe the intricate structures of imported microchips in the interest of national security.

Brookhaven Lab’s National Synchrotron Light Source, NSLS-II, and the TXM research are funded through the Department of Energy’s Office of Science.