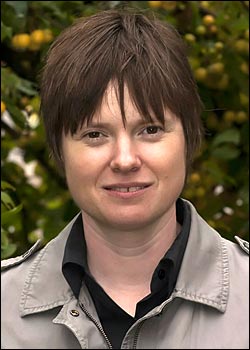 UPTON, NY — Petra Huetenmeyer of Michigan Technological University will give a talk titled “Searching the Universe for Highly Energetic Cosmic Particles and Role Models,” at the U.S. Department of Energy’s Brookhaven National Laboratory on Thursday, May 17, at 4 p.m. in Berkner Hall. Sponsored by Brookhaven Women in Science and Brookhaven Science Associates (the company that manages the Lab) the talk is free and no registration is required. All visitors to the Laboratory age 16 and over must bring a photo ID.

Cosmic rays, which are made up of subatomic and atomic particles ranging from electrons and protons to iron nuclei, bombard the Earth’s atmosphere from space. They are produced and accelerated in the most violent environments of our known universe and can have energies that are orders of magnitude larger than the energies that will be produced by the Earth’s most powerful accelerator, the Large Hadron Collider in Switzerland.

In the 1960s, scientists began considering supernova remnants — the gaseous remains of highly energetic explosions of massive stars (supernovae) — as likely candidates for cosmic ray particle accelerators in our galaxy, and the plot has thickened since. At higher energies other classes of sources, such as gamma ray bursts, are still being considered. Therefore, it is fair to say that even one hundred years after the first detection of cosmic rays by Austrian-American scientist Victor Hess (1936 Nobel Prize laureate in Physics for his discovery of cosmic rays), we still do not know the exact nature of the physics processes that govern their creation and acceleration.

The study of gamma rays provides a crucial piece of the puzzle. Gamma rays are produced by cosmic ray interactions with matter and radiation fields in space, and as neutral particles, they can be traced back to the location of their creation. This will help with the identification of cosmic ray source classes, ultimately leading to uncovering their origin. In her presentation at Brookhaven, Huetenmeyer will discuss how the experiment she is currently working on at the High-Altitude Water Cherenkov Gamma-Ray Observatory (HAWC), located on the Sierra Negra plateau near Puebla in Mexico, will contribute to her quest, and how positive role models have influenced her approach to solving the day-to-day problems of astrophysicists working in large international collaborations. She has long been intrigued by the influence of role models on young scientists and engineers and their careers.

Huetenmeyer received her PhD in elementary particle physics from the University of Hamburg in Germany while working on the OPAL Experiment at CERN. She then switched continents and fields and moved to the University of Utah where she worked on the HiRes experiment, an astrophysical observatory in the Utah desert that measured ultra-high energy cosmic rays.

Before joining Michigan Technological University as an assistant professor in 2009, she was a post doc at Los Alamos National Laboratory where she focused her research on the detection of galactic gamma rays with the Milagro Observatory that was located in the Jemez Mountains, about an hour drive from the LANL. Most recently, she has been involved in the design and construction of the HAWC Observatory, the successor of Milagro to be completed in 2014.