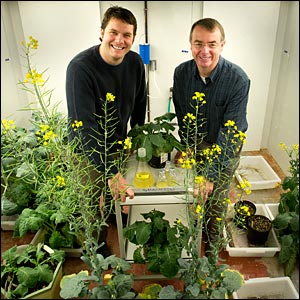 UPTON, NY — Scientists at the U.S. Department of Energy’s Brookhaven National Laboratory have identified key elements in the biochemical mechanism plants use to limit the production of fatty acids. The results suggest ways scientists might target those biochemical pathways to increase the production of plant oils as a renewable resource for biofuels and industrial processes.

“Now that we understand how this system operates — how plants ‘know’ when they’ve made enough oil and how they slow down production — we can look for ways to break the feedback loop so they keep making more oil,” said Brookhaven biochemist John Shanklin, leader of the group publishing the work in the Proceedings of the National Academy of Sciences the week of June 4, 2012.

Similar biochemical feedback loops regulate a wide range of metabolic processes in living things. They work similar to the way a thermostat maintains a relatively constant temperature in your home: When it gets too warm, the heating system turns off until the temperature falls to the set point, at which time it turns on again.

“There were hints that such a feedback system might exist for plant oil production,” said Shanklin, who credits Carl Andre — a former postdoctoral research fellow now working at BASF Plant Science in North Carolina — with designing and carrying out the intricate biochemical detective work that uncovered the details. 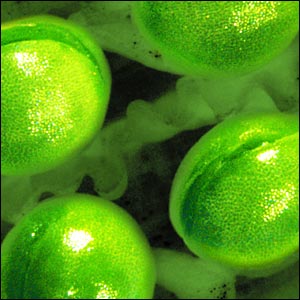 Brassica napus seeds — the oil accumulating tissue of canola. The authors characterized a rapid and reversible feedback inhibition of fatty acid biosynthesis that occurs when the end product inhibits the first committed step in the pathway.

“It’s very difficult to work on developing oil seeds because they are very tiny,” Shanklin explained. So the scientists performed their biochemical tests using a plant embryo cell culture to simulate what goes on in the seeds.

With assistance from the Radiotracer Chemistry and Biological Imaging group at Brookhaven, Andre synthesized “labeled” forms of the fatty acids that occur as intermediates along the metabolic pathway that leads to oil production. He fed these, one at a time, to the plant cell cultures, measuring the labeled metabolites with the help of analytic chemist Richard Haslam of Rothamsted Research in the UK. They also looked to see which added intermediates would inhibit oil production.

Andre’s work pointed to a fatty acid that occurs fairly late in the production process, coupled to a carrier protein (essential to making the oily substance soluble in water), as the key intermediate that puts the brakes on oil production. It’s the first “desaturated” fatty acid — the first one with a double bond between two of the carbon atoms, formed after all 18 carbon atoms are added to the chain.

Then, knowing that this intermediate somehow sent the “slow-down” signal, the team sought to determine its “target” — how it actually inhibits oil synthesis. They knew from other biochemical feedback loops that the likely target would be an enzyme early in the synthesis pathway. But they wanted to figure out exactly which one.

The first two experiments gave them the answer: When they labeled the first compound in the synthesis pathway, which is acetate, very little labeled carbon ended up in the oil and oil production was strongly reduced. But if they fed the second compound, labeled malonate, the labeled carbon quickly entered the oil.

“From these findings we concluded that the accumulation of the first desaturated fatty acid in the synthesis process inhibits the enzyme that operates at the first step, which converts acetate to malonate,” Shanklin said. “That enzyme is Acetyl-CoA carboxylase, or ACCase.” 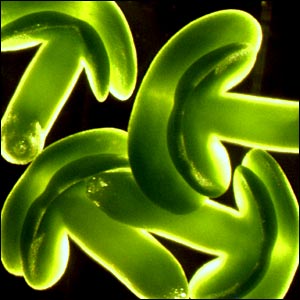 The next step was to make extracts of the tissue culture and directly measure ACCase activity in the test tube. Addition of the suspected slow-down signal provided independent proof that both the signal and target of the signal were correctly identified.

To establish that this feedback mechanism operates in seeds and is not just a weird quirk of the cell-culture setup, the scientists isolated developing canola embryos to test the process. “It worked precisely the same way,” Shanklin said.

With the details of the oil production feedback mechanism in hand, Shanklin’s team is now exploring how they might interfere with the process, including biochemical schemes to keep the “slow-down” signaling metabolite from accumulating, ways to block its effects on ACCase, and more.

“If we can interrupt this process, we hope to fool the cells so they won’t be able to gauge how much oil they have made and will make more,” Shanklin said.

This research was funded by the DOE Office of Science and Bayer CropScience.