UPTON, NY — In a new report on the current status and future of nuclear physics, the National Research Council (NRC) highlights the “spectacular” performance and critical future role of the Relativistic Heavy Ion Collider at the U.S. Department of Energy’s Brookhaven National Laboratory.

The NRC, the principal operating agency of the National Academy of Sciences and the National Academy of Engineering, released on June 26 its fourth decadal report on nuclear physics: “Exploring the Heart of Matter.” The report details significant advances of the past decade, and identifies priorities for driving pure and applied science forward and securing the position of the United States as a global leader in a field that impacts computing, medicine, national security, energy technology, and climate research.

Central to the past decade’s experimental milestones and future innovations sits Brookhaven Lab’s Relativistic Heavy Ion Collider (RHIC), a 2.4-mile accelerator that produces states of matter unseen since the first moments after the Big Bang.

As the report states, “Experiments at RHIC allow nuclear scientists (in the United States, at 59 universities and six national laboratories in 29 states) to answer questions about the microsecond-old universe that cannot be answered by any conceivable astronomical observations made with telescopes and satellites.” 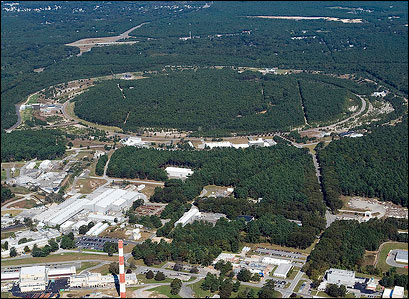 The leading conclusion of the decadal report recommends that “exploiting strategic investments should be an essential component of the U.S. nuclear science program in the coming decade.” The existing infrastructure and expansive versatility of RHIC place Brookhaven’s accelerator in an ideal position to fulfill that mission.

“We are especially encouraged because the recently completed upgrade of RHIC luminosities is one of two ‘strategic investments’ explicitly called out in the preamble to that conclusion,” said physicist Steven Vigdor, head of Brookhaven’s nuclear and particle physics program. “We were able to complete that upgrade about five years faster and at one-seventh the cost envisioned in the 2007 Long Range Plan for U.S. Nuclear Science, thanks to advanced R&D on new accelerator technologies at RHIC. We are continually pushing the state-of-the-art to prepare the facility for future upgrades that will dramatically extend RHIC’s science reach.”

In addition to noting the 2011 upgrades that increased collision rates and allowed RHIC to begin colliding a much wider variety of ion species, the report also recognizes RHIC as a strong candidate for a proposed electron-ion collider, which would take “snapshots” of fundamental particles traveling at nearly the speed of light to reveal fundamental forces and crucial details about the “glue” that holds together 99 percent of the visible matter in the universe.

In evaluating the past decade, the NRC identifies the “first striking discovery” by the RHIC collaborations as the unexpected nature of quark-gluon plasma (QGP), which was expected to act like a gas but instead forms a nearly perfect liquid of nuclear matter when “melted” into a sea of unbound fundamental particles.

“Since operations began in 2000, RHIC has provided spectacular evidence that QGP exists—but it is different than anyone expected,” the report states. It goes on to describe the many questions that still need to be answered in heavy ion research, including determining the critical transition point from “normal” matter to QGP and further exploring the striking connections between the behavior of ultra-hot matter at RHIC and that of some of the coldest matter in the universe. Those experiments will need to be done at both LHC and RHIC, with LHC providing higher energy probes “while the greater flexibility and luminosity at RHIC will give it many advantages in varying the masses and energy of the colliding nuclei to systematically investigate the properties of QGP in various regimes.”

The report also spotlights the high caliber of nuclear physics research and great potential for further advances at institutions including the Thomas Jefferson National Accelerator Facility and Michigan State University.

“RHIC has had an incredibly productive decade by any measure, and we have much left to accomplish,” said Vigdor. “The nuclear physics community has a daunting task ahead to maintain a path to the vibrant future outlined in this decadal survey within the very tight budget guidance it has received from the administration and Congress.”

DOE's Office of Science is the single largest supporter of basic research in the physical sciences in the United States, and is working to address some of the most pressing challenges of our time. For more information, please visit the DOE Office of Science website.