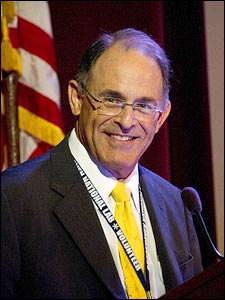 UPTON, NY – Sam Aronson, director of the U.S. Department of Energy’s (DOE) Brookhaven National Laboratory, was elected this month to serve as vice president of the American Physical Society (APS), one of the country’s leading science organizations. Beginning in January 2013, Aronson will spend four years in key leadership roles, including president, representing the nearly 50,000 top scientists that comprise APS.

Aronson was elected to APS Fellow in 2001, an honor limited to no more than one half of one percent of its total membership in a given year. APS Fellowship indicates recognition by leading scientists for singular contributions to physics, and election to its leadership signifies one of the highest honors for the U.S. physics community.

“I am much honored to have been given the opportunity to lead the APS. I hope to work with the rest of the leadership team over the next few years to leverage APS’ considerable influence in advocating on behalf of the U.S. physics community,” said Aronson.

Aronson, who became Brookhaven Lab’s director in 2006, will serve in 2013 as the APS Vice President, and in the successive three years he will serve as President Elect, President, and Past President. During all four years he will be a member of the APS council and executive board, in addition to chairing and serving on other committees with responsibilities ranging from public outreach to fellowship selection.

APS, a volunteer organization that relies upon the dedication of its member scientists and elected officers, is dedicated to supporting and promoting the global physics community and helping drive advances that will benefit humanity. Aronson will work closely with APS as it issues research journals, conducts scientific meetings, and maintains aggressive international education and outreach programs.

Aronson earned his degrees in physics from Columbia and Princeton Universities and joined Brookhaven Lab as an associate physicist in 1978. Over the following decades he rose through the ranks of Brookhaven’s Nuclear and Particle Physics Directorate, led the groundbreaking PHENIX detector collaboration during construction of the Relativistic Heavy Ion Collider (RHIC), and guided the Lab toward major new initiatives aimed at addressing the country’s pressing energy challenges. He was elected Fellow of the American Association for the Advancement of Science (AAAS) in 2005.

Recently, Aronson served as chair of the National Laboratory Directors’ Council and was recognized by the Federal Laboratory Consortium for enhancing the development and commercialization of Lab technologies through patents, licensing, and collaborations with industrial partners. He announced earlier this year that he will step down as Lab director once a successor is found, and he plans to shift his focus back to research.