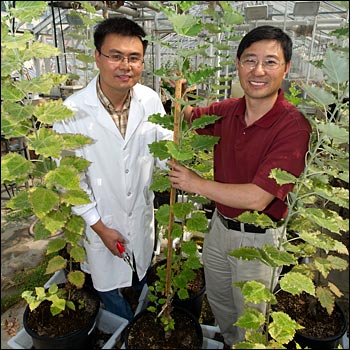 Kewei Zhang and C.J. Liu are exploring ways to make plants easier to convert to biofuels.

UPTON, NY — Scientists at the U.S. Department of Energy’s (DOE) Brookhaven National Laboratory have created a new enzyme that effectively “masks” the synthetic precursors of lignin, a plant cell wall component that makes plant biomass particularly difficult to break down. When it was expressed in plants, this enzyme substantially reduced lignin content in the cell wall and increased the digestibility of cell wall biomass, which should make it easier to convert plant biomass into biofuels. A paper describing the research will be published in The Plant Cell on July 31, 2012.

“We are excited about this study because it not only furthers our fundamental understanding of the molecular mechanisms by which lignin precursors are incorporated into cell walls, but also offers us a potential biotechnological solution in improving plant biomass digestibility,” said Brookhaven biologist Chang-Jun Liu. Liu collaborated on the research with Brookhaven scientists Kewei Zhang, Mohammed-Wadud Bhuiya, and Yuchen Miao, as well as a nuclear magnetic resonance team at the University of Wisconsin.

As a very rigid aromatic polymer and integral cell wall component, lignin prevents digestive enzymes from accessing the simple sugars of cellulose fibers, which are needed to produce useable fuels. Today’s industrial processing methods require cell wall biomass to be pretreated to remove lignin, significantly adding to the cost of biofuel production. Incorporating the new enzyme into plants could substantially reduce the cost of that step.

The scientists first engineered their enzyme in 2009 by modifying one that has a different function but is naturally found in plants. They found that if they mutated two key amino acid sites in the enzyme’s genetic code, the new enzyme could modify lignin precursors in such a way that would prevent them from coupling to form the lignin polymer.

However, when they then inserted the mutated enzyme into Arabidopsis, a small flowering plant commonly used in experiments, it wasn’t effective.

“We found that the enzyme didn’t show the expected effect,” Liu said. “It worked nicely on the bench, but not in the plant.” 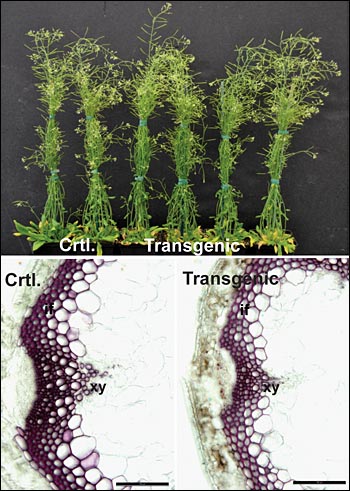 Transgenic plants with an enzyme variant designed to limit the production of the cell wall component lignin showed no dramatic difference in growth (top image, group of four on right) compared to control plants (two on left), but indeed had less lignified xylem tissue (stained violet-red in bottom images) in their stems compared to control plants. Such low-lignin plants should be easier to break down and covert to biofuels than plants with high lignin content.

The group went back to the drawing board, using Brookhaven’s National Synchrotron Light Source to determine the enzyme’s x-ray crystal structure. Eventually, they discovered additional amino acid mutations that only made a small difference in the lab, but had a significant effect in plants.

The new enzyme reduced the lignin content of the Arabidopsis plants by up to 24 percent, leading to a 21 percent increase in the release of cell wall sugars. Furthermore, it did so without compromising the plant’s development or significantly reducing the biomass yield.

The next step for the scientists is to test the enzyme’s function in poplar trees or other DOE-dedicated energy crops, to see if it will improve cell wall biomass digestibility by reducing lignin. Poplars are a good choice for industrial applications due to their relatively fast growth rate and high biomass yield.

Additionally, the group plans to continue tweaking their enzyme to reduce either of the two major subunits of lignin, guaiacyl and syringyl in the cell wall. This too would change lignin’s structure, which might further facilitate cell wall degradability and/or the de-lignification process.

“Our enzyme currently modifies the major lignin precursors indiscriminately. Therefore, in plants, it effectively reduces total lignin content but does not change lignin composition,” explained Liu. “Ideally we will develop additional enzymes that will enable us to precisely tune lignin compositions or change its structures.”

With success in controlling lignin biosynthesis in plants, the scientists also expect to seek additional expertise to assess the agricultural traits of the resulting transgenic crops, and to explore the commercial potential of using these modified forms of biomass as biofuel feedstocks.

DOE’s Office of Science is the single largest supporter of basic research in the physical sciences in the United States, and is working to address some of the most pressing challenges of our time. For more information, please visit http://science.energy.gov.