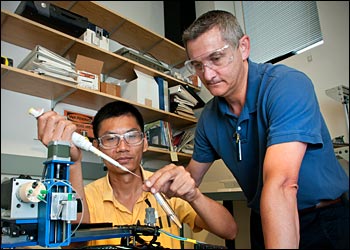 In the lab at NSLS beamline X9, Lin Yang (left) and Marc Allaire prepare samples of proteins for automated x-ray scattering measurements. The auto-sampler pictured will be used with the new detectors.

With photon-counting detectors, biologists can better perform x-ray scattering on proteins in solution. This technique can capture proteins in various states of interaction with other molecules, providing valuable information about protein function to scientists so they can develop new medicines and drugs.

“In recent years, the technology for making detectors has made a lot of progress,” said NSLS beamline scientist Lin Yang. “Now we have a chance to take advantage of that.”

NSLS produces very bright, intense beams of x-rays and other forms of light that enable scientists to probe atomic-level structures and explore the properties of a wide range of materials, from superconductors to ferromagnets to biological molecules.

Many detectors at NSLS record data indirectly by first converting the incoming x-ray into visible light and then measuring the intensity of the converted visible light. The new photon-counting detectors will be able to directly register each individual x-ray photon, thus reducing the amount of noise in the data. They also allow scientists to detect weaker signals.

“We have seen tremendous growth in the number of scientists taking advantage of biomolecular x-ray scattering,” explained NSLS beamline scientist Marc Allaire, who led the team pursuing this award of behalf of staff from Stony Brook University’s Department of Biomedical Engineering and NSLS users from collaborating institutions. “We are looking forward for the new biological sciences that will be done with the improved data collected from these detectors,” he said.

Brookhaven expects to incorporate the new detectors into NSLS within the next year. Later, they will be moved to NSLS-II, now under construction at Brookhaven to replace NSLS. In the new facility, the detectors will be installed at LIX, a new beamline dedicated to high brilliance x-ray scattering for research in the life sciences. Construction of NSLS-II, which will produce x-rays more than 10,000 times brighter than NSLS, is about 80 percent complete.

NSLS operations and the NSLS-II construction project are funded by the DOE Office of Science. DOE’s Office of Science is the single largest supporter of basic research in the physical sciences in the United States, and is working to address some of the most pressing challenges of our time. For more information, please visit science.energy.gov.