The following news release was issued by Stony Brook University. 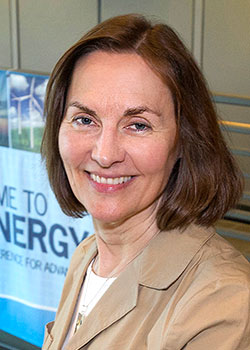 STONY BROOK, NY, September 6, 2012 — Esther Sans Takeuchi, a SUNY Distinguished Professor with a joint appointment in the Department of Chemistry and the Department of Materials Science and Engineering at Stony Brook University, as well as the Chief Scientist in Brookhaven National Laboratory's Global and Regional Solutions Directorate, has been selected as the 2013 recipient of the E.V. Murphree Award in Industrial and Engineering Chemistry from the American Chemical Society.

Professor Takeuchi, one of the world’s leading energy storage researchers who is best known for developing the technology for the power source used in implantable cardiac defibrillators and for holding 153 patents – more than any woman in the United States, will receive this prestigious award at the 245th American Chemical Society National Meeting and Exposition in New Orleans, Louisiana, April 7-11, 2013.

Sponsored by the Exxon Mobil Research and Engineering Co., the E.V. Murphree Award is designed to stimulate research in industrial and engineering chemistry, the development of chemical engineering principles and their application to industrial processes. The award consists of $5,000 and a certificate.

“I am very pleased to receive this national award from the American Chemical Society,” said Dr. Takeuchi. “It is a great honor to be considered a peer among the illustrious previous award recipients.”

Dr. Takeuchi is an internationally recognized expert in the multidisciplinary field of battery research, whose innovative work inventing lithium/silver vanadium oxide (Li/SVO) has been instrumental in saving innumerable lives. LiSVO is the enabling power source technology that makes possible the successful implementation of the implantable cardiac defibrillator.

“I congratulate Dr. Takeuchi on this well-deserved honor,” said Dennis N. Assanis, Provost and Senior Vice President for Academic Affairs at Stony Brook University and Vice President for Brookhaven National Laboratory Affairs. “The E.V. Murphree Award in Industrial and Engineering Chemistry from the American Chemical Society is further evidence of her distinguished reputation for conducting groundbreaking and translational research. As one of the nation’s most prolific inventors and energy storage researchers, Dr. Takeuchi’s work is vital in our efforts to provide transformative solutions for smart grid energy storage and light vehicle electrification.”

Dr. Takeuchi was inducted into the National Inventors Hall of Fame (2011) and is a recipient of the National Medal of Technology and Innovation presented by President Obama in 2009, the highest honor possible for technological achievement in the United States. She has been inducted into the prestigious National Academy of Engineering and selected as a Fellow of the American Institute for Medical and Biological Engineering. She has received numerous “inventor of the year” awards and has been recognized on a number of occasions for her impact as a woman in the sciences.