The Brookhaven Graphite Research Reactor, where major decommissioning milestones were recently reached after the remaining radioactive materials from the facility’s bioshield were shipped to a licensed offsite disposal facility.

Upton, NY — The U.S. Department of Energy’s (DOE) Brookhaven National Laboratory has reached a major milestone in decommissioning the Brookhaven Graphite Research Reactor (BGRR). In June 2012, the last shipment of radioactive materials from demolition of the 4,760-ton steel and concrete biological shield that encased the reactor core was transported from the Laboratory to a licensed disposal facility. The physical work of removing the reactor’s graphite core and associated structures, including the bioshield, is now complete.

The building that housed the reactor remains, and an engineered asphalt cap system has been installed around the reactor building to prevent rainwater from mobilizing any residual contamination in subsurface soil and remaining concrete structures in the ground beneath the building. Additionally, an extensive groundwater monitoring system has been installed. The 320-foot stack that served the BGRR and other facilities is scheduled for removal by 2020.

“The work completed here demonstrates what can be accomplished by people with vision, with determination, and with corresponding goals,” said Thomas P. D’Agostino, the U.S. Department of Energy’s Under Secretary for Nuclear Security. “That vision began with the idea of safely decommissioning a research facility that served its nation well.” 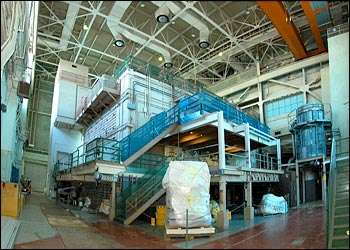 A total of nearly 24 million pounds of radioactive waste was removed from the BGRR, safely packaged and shipped to licensed disposal sites in Nevada and Utah. Since its start in 1997, the project has cost approximately $148 million, including $74.6 million to remove the reactor core and bioshield. The project received $39.5 million from the American Recovery and Reinvestment Act, which accelerated environmental cleanup work substantially.

“Completion of this project is a real testament to DOE’s and Brookhaven’s commitment to cleaning up the Lab site and ensuring it remains safe for future generations of Long Islanders,” said George Goode, Assistant Laboratory Director for Environment, Safety & Health. “This is a major milestone for us, for the Department of Energy, and the nation, as it’s the first time a U.S. reactor of this type and size has been completely dismantled. Once again, the BGRR is paving the way for future innovations, as the techniques that project teams developed here to solve significant technical challenges associated with the decommissioning process are now being used in similar projects across the DOE complex.”

The BGRR was the first reactor built in the U.S. for peacetime atomic research following World War II. Construction began in 1947 and the reactor started operating in August 1950. In the next 18 years, an estimated 25,000 scientific experiments were carried out at the BGRR using neutrons produced in the facility’s 700-ton graphite core, made up of more than 60,000 individual graphite blocks. The BGRR was placed on standby in 1968 and then permanently shut down as the next-generation reactor High Flux Beam Reactor (HFBR), which produced more abundant amounts of neutrons for science experiments, was built next door to the BGRR.

During the BGRR’s operation, scientists worked at the facility to advance understanding of atomic nuclei, study the structures of solid materials, and investigate many physical, chemical, and biological systems. The reactor also produced groundbreaking medical isotopes that are particularly useful in diagnosing and treating cancer and other diseases. Technetium-99m, a radioisotope that is currently used in more than 13 million medical procedures each year, came into widespread use as a result of its advancement at the BGRR as a key diagnostic tool. 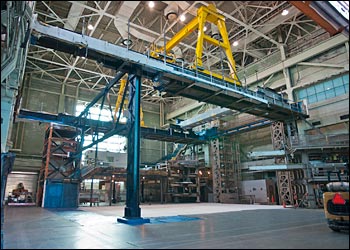 2012: Inside the Brookhaven Graphite Research Reactor building, where the 4,760-ton bioshield and 700-ton reactor core stood. The last of the radioactive materials from the facility’s bioshield were shipped to a licensed offsite disposal facility in June 2012.

Work to decommission the BGRR began in the late 1990s, and involved a number of sub-projects that included cleaning out the reactor's below-ground ducts and removing its above-ground ducts, fanhouse, fuel canal, and the graphite core of the reactor. Dismantling the BGRR’s bioshield, the last of many major sub-projects completed during the decommissioning process, began in June 2010. The bioshield originally stood 55 feet long, 37 feet wide, and 33 feet tall. Constructed of concrete walls four feet thick and sheathed in three-inch-thick steel, it protected workers and researchers from radiation produced in the reactor’s core.

The BGRR decommissioning marks a major milestone in the CERCLA cleanup at Brookhaven. The Lab’s other two reactors — the High Flux Beam Reactor and Brookhaven Medical Research Reactor — were shut down in 1996 and 2000 respectively. Both have now been placed into a safe storage mode, with all reactor fuel and fluids removed, until decommissioning is completed. The Lab has no operating reactors.

All of the other projects contained in the original Interagency Agreement among DOE, EPA, and DEC — with the exception of the planned removal of the stack — have now been completed. Thousands of tons of contaminated soils and material have been removed from the site, all planned on- and off-site groundwater treatment systems have been installed and are operating, and the Peconic River has been cleaned up and restored. In addition, the Lab has implemented extensive facility monitoring and environmental management programs to help prevent future impacts. In total, approximately $550 million has been spent to date to complete all the CERCLA projects.