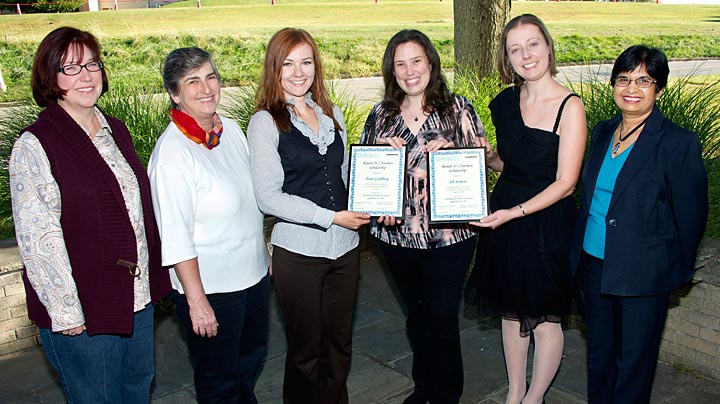 “This year, we found two candidates who were both exceptional students with excellent qualifications, so we granted two scholarships rather than the usual one,” said Loralie Smart, a BWIS executive board member who coordinates the scholarship program.

Named after the late Renate Chasman, a renowned physicist who worked at Brookhaven Lab, the $2,000 scholarship is awarded each year to a re-entry woman — one whose college education was interrupted, but who has returned to pursue a degree on a half time or greater basis. The scholarship is funded by private donations, and has provided a token of economic support to twenty-eight women since its inception in 1987.

As a young girl in Poland, Anna Goldberg admired the achievements of role model Marie Curie. She decided to pursue a career in science and worked hard to overcome the challenge of having English as a second language. As a graduating senior at Stony Brook University, she was recognized with the Academic Achievement Award in chemical and molecular engineering, and her senior thesis research was awarded first place at the American Institute of Chemical Engineers Mid-Atlantic Regional Conference. She earned her bachelor’s degree in chemical and molecular engineering with Summa Cum Laude Honors in 2009. Then, just married, she took a position with Pall Corporation in the field of polymer science and engineering.

At Pall, she gained valuable experience, but felt unfulfilled. She enrolled as a part-time material science graduate student at Stony Brook in fall 2010. Shortly thereafter, she joined the Target Processing Laboratory at BNL and temporarily became fully focused on a career as a radiochemist. Then, recently, she made the commitment to return to graduate studies and was accepted into the Master of Science in the chemistry program at Stony Brook. She plans to complete her degree in spring 2013 and is considering pursuing a doctoral degree in chemistry.

“I am absolutely honored to receive the Renate W. Chasman Scholarship,” said Goldberg. “Completing my graduate studies is possible thanks to the love and support of my husband, my mom and my parents-in-law. I am especially grateful for women like Marie Curie and Renate Chasman who paved the way for other women to excel in science and engineering.”

Before becoming interested in computer science, Jill Jermyn devoted her time to musical performance as a professional violinist. She studied with the Emerson String Quartet, New York Philharmonic, and Philadelphia Orchestra, and performed in great concert halls including Carnegie Hall and the Kennedy Center. She spent several years as a performing musician. During this time, her family was tragically affected by two terrorist actions, the Pan Am Flight 103 and the World Trade Center attack. She decided to follow a path to help prevent other families suffer such losses.

At the suggestion of a former professor, Jermyn decided to take classes at Stony Brook. With no background in computer science, she delved into computer programming books and sat in upper division courses covering material well beyond the content her classmates were learning. By spring of 2011, she knew she wanted to explore the area of cyber security and accepted a software engineering internship at Applied Visions’ Secure Decisions division. This research team experience inspired her to return to graduate school last January to pursue her Masters’ at Columbia, where she works as a research assistant on innovations in intrusion detection systems. This January, Jermyn will enter the Ph.D. program at Columbia in cyber security.

“It is a great honor to be selected for the Chasman Scholarship,” said Jermyn. “As a woman starting her career in a male-dominated field after having pursued a completely different profession, I am greatly appreciative of the inspiration and support provided by this award. I hope to be a role model to those who have been in similar situations and encourage young women to pursue careers in the science, math, and engineering fields.”