UPTON, NY — Scientists at the U.S. Department of Energy’s (DOE) Brookhaven National Laboratory have revealed a new connection between drug addiction and a distinct part of the brain that may govern motivation. The research, published October 23, 2012, in Translational Psychiatry as an Advance Online Publication*, shows that individuals addicted to cocaine have abnormal functioning of the midbrain, a brain region responsible for releasing dopamine in the presence of important stimuli, such as food, to make individuals repeat the behaviors that would result in obtaining these stimuli again. 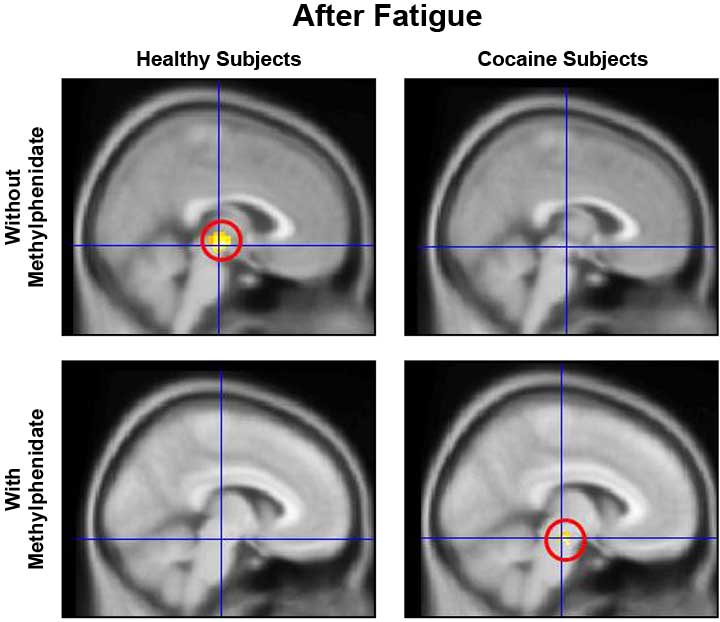 In this study, a task designed to induce fatigue activated the midbrain in healthy subjects but not in cocaine-addicted subjects (top row). However, when testsubjects were first given a dose of a pharmaceutical drug that boosts braindopamine function (methylphenidate, bottom row), these effects completely flipped: There was some midbrain activation in the cocaine-addicted subjects—suggesting that methylphenidate may help improve their brainfunction—while there was no activation of midbrain activity in healthy subjects with methylphenidate.

The study sought to highlight how the midbrain operates in cocaine-addicted individuals when fatigue sets in. Using functional magnetic resonance imaging (fMRI), a way of noninvasively mapping brain function, scientists recorded both healthy individuals’ and cocaine-addicted individuals’ midbrain activity throughout the course of a classic test of mental acuity with the intention of imposing fatigue through task repetition. Called the Stroop test, the task involves indentifying the color of the letters of a word that spell out the name of the same or a different color. Because a faster response is to read a word than identify its color, the test measures one’s ability to inhibit a dominant, but incorrect, response when for example the word blue is written in red ink.

Scientists posited that as the test neared its end and the subjects’ fatigue was higher, the midbrain would be more active. As recent evidence has shown that the midbrain might also be strongly tied to motivation, scientists theorized that higher activity in the midbrain provides a boost to keep individuals motivated. 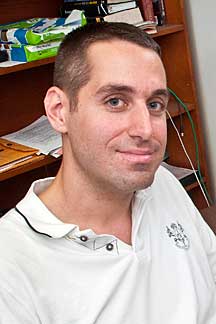 “When the healthy controls activated this region as they presumably became fatigued, we interpreted it to mean they were getting a bump in motivation,” said lead author Scott J. Moeller, a postdoctoral fellow at Brookhaven Lab. “The cocaine users showed an opposite pattern—midbrain activity actually decreased over the course of the task,” he said.

The study rests on the idea that when you suffer from addiction, fatigue—whether from a difficult task or mental stress from a long day—could make you more susceptible to your harmful indulgences. “If you’re stressed or tired, you might go for that chocolate that you might not have gone for otherwise,” Moeller said of even healthy individuals when faced with an indulgence. “The stakes are higher for individuals addicted to cocaine.”

Once the connections between fatigue and midbrain activity were established, the team set out to reverse the effects in the addicted individuals using pharmaceuticals.

“We know that drug addiction is associated with many deficits in dopamine function,” Moeller said. So in a new group of addicted individuals the scientists administered methylphenidate, which boosts the amount of dopamine in the brain, during one study session while administering a placebo during another study session. When given placebo, the researchers saw no change in subjects’ midbrain activity; when given methylphenidate, however, the researchers saw exactly what they were looking for.

“When they were given methylphenidate, the cocaine-addicted subjects started to look more like the controls in how their midbrain functioned during fatigue.”

In contrast, “the controls who were given methylphenidate actually started to look like the cocaine subjects—it was a complete flip,” Moeller said, explaining that in the healthy control group, too much dopamine can degrade cognitive functioning.

Though the study was only one in a series of investigations, potential applications of the results down the line could yield new, highly effective methods of drug rehabilitation.

“If certain drugs can be shown to enhance functioning of this brain region, then maybe we can use it in service of sustaining addicted individuals’ motivation in situations that might otherwise trigger relapse,” he said.