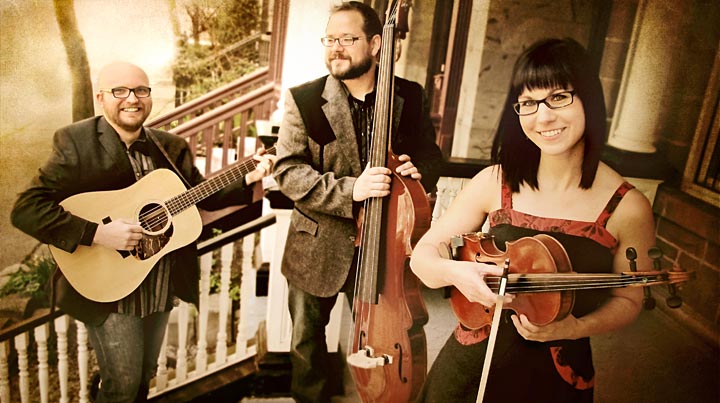 UPTON, NY - Internationally renowned Canadian fiddler, singer, songwriter and step dancer April Verch will bring her band to perform at the U.S. Department of Energy's Brookhaven National Laboratory on Wednesday, January 16, at noon in Berkner Hall. Sponsored by Brookhaven Science Associates, the concert is free and open to the public. All visitors to the Laboratory age 16 and over must bring a photo I.D.

Verch at her previous Brookhaven performance.

April Verch has a passion for performing and her goal is to touch the lives of those who are listening at any given moment. She was born to traditional music in Canada’s hard-working, hard-dancing Ottawa Valley, where music is a foot-stomping, open-minded fusion of Irish, Scottish, French, German, and Polish influences, sprinkled with tangy spices of American country music. The twang of the banjo and the driving Franco-Celtic pulse of the fiddle are as ingrained in April as are snowbound winters and Saturday dances.

April was a local star at four, step dancing with her sister and winning awards at contests. She became the first woman in history to win both of Canada’s most prestigious fiddle championships: the Grand Masters and Canadian Open. When Canada hosted the 2010 Winter Olympics she was asked to represent her country’s music at the opening ceremonies.

With a performance art that is constantly evolving, April also explores the Southern mountain traditions known as old time music, without losing reference to her Northern roots. Plucky, straight-backed Canadian tunes fit so snugly beside ancient Appalachian airs that you’d think they’d been neighbors for centuries!