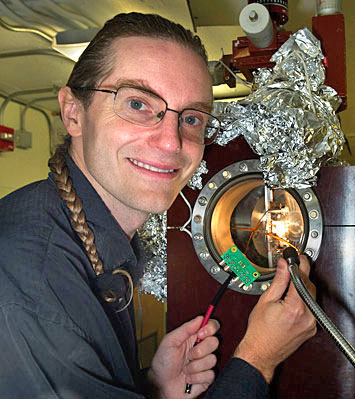 UPTON, NY - John Smedley, a physicist at the U.S. Department of Energy's Brookhaven National Laboratory, has been named the 2013 recipient of the Institute of Electrical and Electronics Engineers (IEEE) Charles Hirsch Award in recognition of his “contributions to the advancement of photocathode technology.” Playing an integral role in the success of cutting-edge accelerator projects, photocathode devices designed by Smedley and his colleagues in Brookhaven’s Instrumentation Division generate particle beams capable of probing the fundamental laws of nature, the properties of materials for applications in energy technologies, and more.

IEEE is a nonprofit professional association that is a leading authority in technical areas ranging from aerospace and biomedical technology to computer engineering. The Charles Hirsch Award, named for the creative engineer at the Hazeltine Corporation, now BAE Systems, recognizes innovative and significant technical accomplishments. Smedley will be honored at the IEEE Long Island Section's annual awards banquet at the Inn at Fox Hollow on March 21.

“I’m very happy to have been selected for this award, and to have the opportunity to work with my talented colleagues in the Instrumentation Division,” said Smedley.

For almost twenty years, Smedley has been researching and designing novel accelerator photocathodes at Brookhaven. Building these miniature electron emitters, which generate the electron beams that are the heart of many accelerator experiments, requires the delicate manipulation of materials, some composed of layers as thin as a single atom. When photocathodes are struck by photons—quantum packets of light—they produce electrons, a conversion from light to electric current that has enabled a long history of technological advances.

“Our group has been involved in almost all of the major accelerator projects at the Laboratory, including the Relativistic Heavy Ion Collider (RHIC), the National Synchrotron Light Source (NSLS), and the upcoming NSLS-II. Accelerator science has had a major impact on the Lab’s history, and I think it is also a major element of its future. What we’re doing now is using existing technologies to design better photocathodes, which will lead to the next generation of accelerator and light source technologies.”

In accelerators, a photocathode exploits the photoelectric effect to produce an electron beam that is used to create a collision with other particles, produce x-ray pulses, or scatter off targets to determine their structure, among other applications. This cathode must be built to withstand the accelerator environment’s harsh electric fields, high currents, and chemical contaminants without melting or malfunctioning, and must also be able to generate a consistent high-quality electron beam over a long lifetime.

Smedley’s photocathode designs have met these challenges, and benefit from his position in Instrumentation because of his ability to work closely with other groups at Brookhaven.  By understanding and using the tools of modern materials science available at NSLS and the Center for Functional Nanomaterials (CFN), Smedley’s photocathodes can be engineered by looking at the cathode’s development using x-rays in real time, rather than simply judging their effectiveness solely by observing the end result. This technique has been used in semiconductor design and growth for years, but Smedley's team has pioneered its application to photocathode design.

“John is an extremely talented physicist, making vital contributions to the laboratory’s core capabilities that extend beyond those relating to his photocathode expertise.  His enthusiasm for science enlivens junior and senior colleagues alike, and his recognition by IEEE is thoroughly deserved,” said Instrumentation Division Head Graham Smith.

Since so many experiments—including the Source Development Lab (SDL) linear accelerator in Photon Sciences and the Laser-Electron Accelerator Facility (LEAF) in Chemistry—rely on the same fundamental electron source technology, Smedley’s work has robust multidisciplinary applications.

“When I came to the NSLS in 2004, I knew nothing about x-ray science,” Smedley said. “My training was in accelerator physics. Over the past eight years, I’ve become a materials scientist, a testament to the dedication and skill of my colleagues. I’ve used 20 beamlines at the NSLS, and several facilities at the CFN. Brookhaven is the only national lab owned by the DOE that has an instrumentation division, so this sort of work isn’t possible anywhere but here, where we have such a broad array of capabilities.”

Most recently, Smedley has been involved in the development of a cutting-edge diamond amplified photocathode that may revolutionize fourth-generation light source technology. By using synthetic diamonds, which provide a level of uniformity and purity that make them ideal components for electron amplifiers, Smedley's team was able to create amplifiers capable of increasing an electron beam’s current more than 300 times. This kind of amplification would also be useful for linear accelerators, or linacs, including the energy recovery linac that is being developed for RHIC.

In addition, should the “eRHIC” upgrade proposal move forward, which would commission the world’s only electron-ion collider, Smedley's group in Instrumentation will be challenged to design the most sophisticated photocathode yet: a device capable of producing a 50-milliamp polarized electron source. To put that in perspective, current polarized electron sources max out at about one milliamp. Smedley and his team have already begun work in the hope that eRHIC will become a reality.

Smedley earned a BA in physics and mathematics at Johns Hopkins University in 1994, and a Ph.D. in accelerator physics from Stony Brook University in 2001. While an undergraduate, Smedley spent time at Brookhaven as part of the Science Undergraduate Laboratory Internship program (SULI), and officially joined the Lab as a Research Associate in 2001.

Funding for the award-winning cathodes came from the DOE Office of Science (BES and HEP).