The following press release from the National Center for Atmospheric Research details a new multi-agency project on solar forecasting, funded by DOE's Office of Energy Efficiency and Renewable Energy. The Long Island Solar Farm on the Brookhaven Lab site will be one of several facilities that will be used to test out the solar forecasting capabilities. Staff from Brookhaven’s Environmental Sciences Department will provide monitoring of solar resources and cloud tracking using Total Sky Imagers, while the Computational Sciences Center (CSC) is leading a student team to develop “now-casting” algorithms, focused on near-term (less than one hour) forecast capabilities.  The CSC’s IBM Blue Gene supercomputer will be used by others in the project for running large Weather Research and Forecasting models, looking at a time horizon up to 36 hours.

Solar Energy to get Boost from Cutting-edge Forecasts 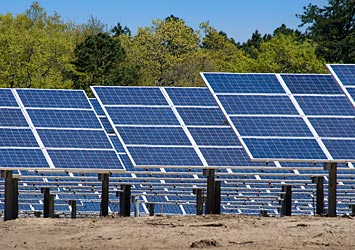 The research team is designing a prototype system to forecast sunlight and resulting power every 15 minutes over specific solar facilities, thereby enabling utilities to continuously anticipate the amount of available solar energy. The work, funded primarily with a $4.1 million U.S. Department of Energy grant, will draw on cutting-edge research techniques at leading government labs and universities across the country, in partnership with utilities, other energy companies, and commercial forecast providers.

Much of the focus will be on generating detailed predictions of clouds and atmospheric particles that can reduce incoming energy from the Sun.

“It’s critical for utility managers to know how much sunlight will be reaching solar energy plants in order to have confidence that they can supply sufficient power when their customers need it,” says Sue Ellen Haupt, director of NCAR’s Weather Systems and Assessment Program and the lead researcher on the solar energy project. “These detailed cloud and irradiance forecasts are a vital step in using more energy from the Sun.”

“Improving forecasts for renewable energy from the Sun produces a major return on investment for society,” says Thomas Bogdan, president of the University Corporation for Atmospheric Research, which manages NCAR on behalf of the National Science Foundation. “By helping utilities produce energy more efficiently from the Sun, we can make this market more cost competitive.”

More than half of all states in the U.S. have mandated that utilities increase their use of renewable energy as a way to reduce dependence on fossil fuels such as coal, oil, and natural gas, which affect air quality and release greenhouse gases associated with climate change. But the shift to energy sources such as solar or wind means relying on resources that are difficult to predict.

Because large amounts of electricity cannot be stored in a cost-effective manner, power generated by a solar panel or any other source must be promptly consumed. If an electric utility powers down a coal- or natural gas-fired facility in anticipation of solar energy, those plants may not be able to power up fast enough if clouds roll in. The only option in such a scenario is to buy energy on the spot market, which can be very costly.

Conversely, if more sunshine reaches a solar farm than expected, the extra energy can go to waste.

But predicting clouds, which form out of microscopic droplets of water or ice, is also notoriously difficult. Clouds are affected by a myriad of factors, including winds, humidity, sunlight, surface heat, and tiny airborne particles, as well as chemicals and gases in the atmosphere.

Solar energy output is affected not just by when and where clouds form, but also by the types of clouds present. The thickness and elevation of clouds have greatly differing effects on the amount of sunlight reaching the ground. Wispy cirrus clouds several miles above the surface, for example, block far less sunlight than thick, low-lying stratus clouds.

To design a system that can generate such detailed forecasts, NCAR and its partners will marshal an array of observing instruments, including lidars (which use laser-based technology to take measurements in the atmosphere); specialized computer models; and mathematical and artificial intelligence techniques. Central to the effort will be three total sky imagers in each of several locations, which will observe the entire sky, triangulate the height and depth of clouds, and trace their paths across the sky.

The team will test these advanced capabilities during different seasons in several geographically diverse U.S. locations: the Northeast, Florida, Colorado/New Mexico, and California. The goal is to ensure that the system works year round in different types of weather patterns.

Not Just for Solar Energy

Once the system is tested, the techniques will be widely disseminated for use by the energy industry and meteorologists.

“This will raise the bar for providing timely forecasts for solar power, ” Haupt says. “It also represents a great opportunity for providing far more detail about clouds in the everyday weather forecasts that we all rely on.”

One application for such detailed forecasts could be short-term predictions of pavement temperatures. Such information would be useful to airport managers, road crews, and professional race car drivers.

“Pavement temperatures make quite a bit of difference in how tires grip the surface,” says Sheldon Drobot, deputy director of NCAR’s Weather Systems and Assessment Program. “This has substantial safety implications.”

NCAR is launching the solar project with numerous partners in the public and private sectors. These include:

Computing time will be provided by the New York State Department of Economic Development's Division of Science, Technology and Innovation on an IBM Blue Gene supercomputer at Brookhaven National Laboratory.