Recognition for design of detectors with applications in homeland security, medicine, astronomy 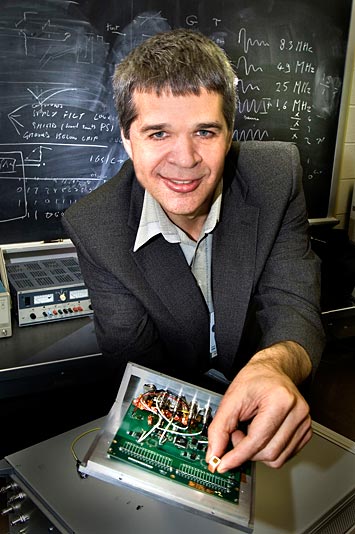 Upton, New York – Aleksey Bolotnikov, a physicist at the U.S. Department of Energy's Brookhaven National Laboratory, has been named a 2013 Fellow of the SPIE, the international society for optics and photonics. Bolotnikov is recognized for his achievements in "semiconductor devices for single-photon detection and imaging of gamma rays."

As part of the Nonproliferation and National Security Department (NNS), Bolotnikov developed compact high-resolution semiconductor detectors capable of sensing high-energy x-rays and gamma rays at room temperature. These portable devices are used to determine what type of radioactive material is present in a nuclear facility or to identify a source of radiation found in high-risk locations, and also has applications in medical imaging and astronomy. Previously recognized by the Institute of Electrical and Electronics Engineers (IEEE) and R&D Magazine for his research, Bolotnikov continues to improve detector technology and make new models more efficient, cost-effective, and capable of identifying even the smallest traces of radioactivity.

"I'm very appreciative of this recognition of my work," Bolotnikov said. "We're always trying to enhance the quality of the materials being used, and to increase our knowledge of the technology. These detectors will be useful not only at airports or other points of entry, but in medicine and astronomy, where these detectors are installed on satellite telescopes used to capture x- and gamma-ray images of deep space."

The sophisticated radiation detectors designed by Bolotnikov and his team use cadmium zinc telluride (CZT), a crystal that channels high-energy particles or gamma rays toward an electrode embedded in the detecting device. The electrode measures and records the resulting signals.

In a major shift from previous models, which required an expensive liquid nitrogen cooling system to regulate the detector's function, Bolotnikov and his team have designed detectors that work at ambient temperature. This breakthrough makes the detectors extremely portable and keeps the devices at a relatively low price point. Simultaneous improvements in the detectors' efficiency make them capable of detecting radiation from greater distances and with increased precision.

The portability and compact size of these detectors has led to applications in fields outside of national security, including potentially life-saving applications in cancer detection. In 2009, Bolotnikov and others at Brookhaven patented a compact gamma-ray camera with CZT detector technology that provides non-invasive, high-resolution images of cancerous tumors. Aleksey and his team were recognized with an R&D 100 Award for this accomplishment.

"Dr. Bolotnikov is an ingenious individual, a quiet and thoughtful person, and a dedicated researcher.  We are lucky to have him in our Department," said Carol Kessler, NNS chair.

The advances Bolotnikov and his colleagues from NNS have made in refining CZT crystals are also expanding the limits of galactic exploration. In June 2012, NASA launched the Nuclear Spectroscopic Telescope Array (NuSTAR), a mission that allows astronomers to study the universe and the origin of matter by detecting and analyzing high-energy x-rays emitted by neutron stars and supernovae in the Milky Way galaxy. CZT crystals selected by Bolotnikov and his colleagues at NSLS are installed on orbiting telescopes that extend sensitivity to higher energies compared to previous missions. While Brookhaven was not directly involved in this NASA mission, the success of the telescope array is an example of the broad impact of cutting-edge science and collaboration between scientists.

"The Lab provides so many opportunities for good science," Bolotnikov said. "The performance of this device is much better than currently used technology. I'm lucky to work with my adviser, Ralph James, and his team of gifted scientists. Also, our advanced detectors wouldn't be possible without help from Gianluigi De Geronimo and his team in Instrumentation. The accomplishment is collaborative."

Bolotnikov earned an M.A. and Ph.D., both in physics, from the Moscow Engineering and Physics Institute in 1983 and 1991, respectively. After working as a postdoctoral research scientist at Columbia University from 1991 to 1994, he became a National Research Council associate at NASA's Marshall Space Flight Center from 1994 to 1997. He joined California Institute of Technology as a senior research scientist in 1997, and he came to Brookhaven Lab in 2003.

Bolotnikov's work on gamma- and x-ray detectors was funded by the Department of Energy's National Nuclear Security Administration.