Chemist Jeanne A. Hardy to Give Talk at Brookhaven Lab on Caspases, Causative Factor in Neurodegenerative Diseases , 4/24 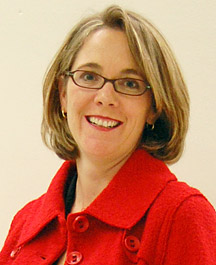 UPTON, NY — Chemist Jeanne A. Hardy of the University of Massachusetts (UMass) Amherst, will give a talk, titled "Handcuffing the Killers: Conformational Control and Real-Time Monitoring of Caspase Proteolytic Activity," at the U.S. Department of Energy's Brookhaven National Laboratory on Wednesday, April 24, at 4 p.m. in Berkner Hall. Sponsored by Brookhaven Women in Science (BWIS) and Brookhaven Science Associates (the company that manages the Lab), the talk is free and open to the public. Visitors to the Laboratory 16 or older must carry photo I.D.

When mutated, damaged or old cells don't die off properly, problems like cancer, auto-immune or neurodegenerative diseases can result. Seeing how apoptosis (programmed cell death) works could help scientists identify the molecular events that cause both normal and diseased cells to die.

During her talk at Brookhaven, Hardy will discuss how researchers have developed an apoptosis "reporter" that tracks the actions of caspases, molecular scissors that cut key proteins to kill cells. The group used green florescent protein and attached a small protein tail to keep it dark. When caspases are active, they chop the tail off and give scientists a glowing green view of cell death.

In addition to her work as a lab leader and professor, Hardy also helped to cofound a mutual mentoring program for women faculty in STEM (Science, Technology, Engineering, and Math) disciplines at UMass. Inspired by the book Every Other Thursday, which describes a mutual mentoring group in the Bay Area that has been meeting for 30 years and involves several National Academy members and prominent scientists, the mentoring program at UMass continues to grow strong. Hardy will share some of the organizing principles around this highly successful mentoring group she founded and with which she continues to be involved.

Hardy earned her BS and MS in chemistry and biochemistry at Utah State University in 1994. She attended graduate school at the University of California Berkeley Department of Molecular and Cellular Biology, where she earned a PhD in 2000 for her work under the guidance of Hillary Nelson on the structure of the Heat Shock Transcription Factor. She was awarded a NIH Ruth L. Kirschstein NRSA Postdoctoral Fellowship to join the laboratory of National Academy of Science member James Wells at Sunesis Pharmaceuticals in South San Francisco, CA. In 2005, she joined the Chemistry Department at the UMass Amherst as an assistant professor and established a lab focused on biophysics and structural biology of biomedically relevant proteases. In 2012, she was promoted to the rank of associate professor with tenure. Her work on the structure and allosteric regulation of caspases has been recognized by several awards including one from the Smith Family Foundation, a Beckman Young Investigator Award and a Cottrell Scholar Award.