'Research at CERN — From the Highest Energies to the Smallest Particles'

CERN Director General Rolf-Dieter Heuer to Speak at Brookhaven Lab on Wednesday, May 1 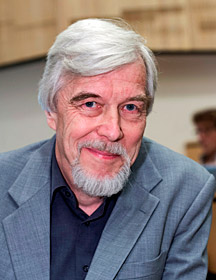 UPTON, NY—Rolf-Dieter Heuer, director general at CERN—the European Organization for Nuclear Research—will give a BSA Distinguished Lecture, titled "Research at CERN—From the Highest Energies to the Smallest Particles," at the U.S. Department of Energy's Brookhaven National Laboratory on Wednesday, May 1, at 5:30 p.m. in Berkner Hall.

A new era of discoveries in particle physics began with the start of collisions at the Large Hadron Collider (LHC) at CERN in 2009. Scientists use the 27-kilometer-round LHC to collide protons and lead ions at nearly the speed of light and record-breaking energy levels. The results they extract from these collisions provide a deeper understanding of basic building blocks of all matter in the universe—new insights into the origin of mass, the nature of dark matter, and other fundamental mysteries that could change our view of the world.

Now, scientists are using recent data from collisions at the LHC to close in on the Higgs boson—the last remaining piece of the Standard Model, a menu of the smallest particles that make up the universe and how they interact.

During this BSA Distinguished Lecture, Heuer will discuss some of the reasons for excitement surrounding the LHC and future findings from the monumental experiments there. He will address the exciting physics prospects the LHC offers; present first results, including the recent discovery of a "Higgs" boson; and provide a look at the LHC's future.

Heuer earned a Ph.D. in physics at the University of Heidelberg in 1977. From 1984 to 1998, he was a staff member at CERN and from 1994 to 1998 was the spokesperson for the OPAL experiment at CERN's Large Electron-Positron Collider. Heuer has been a full professor of experimental physics at the University of Hamburg in Germany since 1998. From 2004 to 2008, he was research director for particle and astroparticle physics at the DESY laboratory in Germany. He became director general at CERN in 2009.

Heuer has been a member of many scientific committees and advisory councils. He has received 10 honorary degrees from universities in Europe, Canada, and Australia. In 2012, the European Physical Society awarded Heuer—with Sergio Bertolucci and Steve Myers—the Edison Volta Prize for leading efforts that resulted in many significant advances in high energy particle physics.