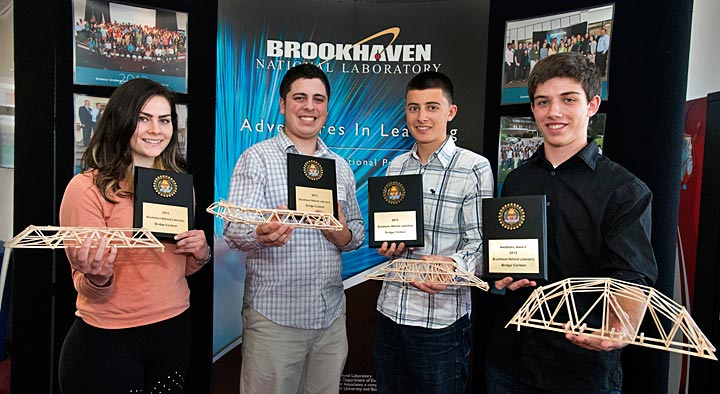 UPTON, NY — Patchogue-Medford High School students won the top three spots in Brookhaven National Laboratory's 2013 Model Bridge Building Contest. Over 160 high school students from 10 Suffolk County schools entered the competition, for which they designed and built model bridges with the goal of making the lightest bridge that held the most weight. The award for the most aesthetically pleasing bridge was given to Nikoli Rinaldi of Elwood-John Glenn High School.

At a recent awards ceremony held at the Lab, John Carter of the U.S. Department of Energy's Brookhaven Site Office told the students that the real goal of competitions such as these is to spark curiosity and encourage students to think and to learn. "By participating in this competition you found an opportunity and embraced it," said Carter. "We hope this experience catapults you toward a career in science, technology, engineering, or math.  Congratulations to all of you."

Ken White, manager of Brookhaven Lab's Office of Educational Programs, also addressed the students. "I look at you and I see a bright future. It is rewarding to see students recognized for their hard work and achievements," he said.