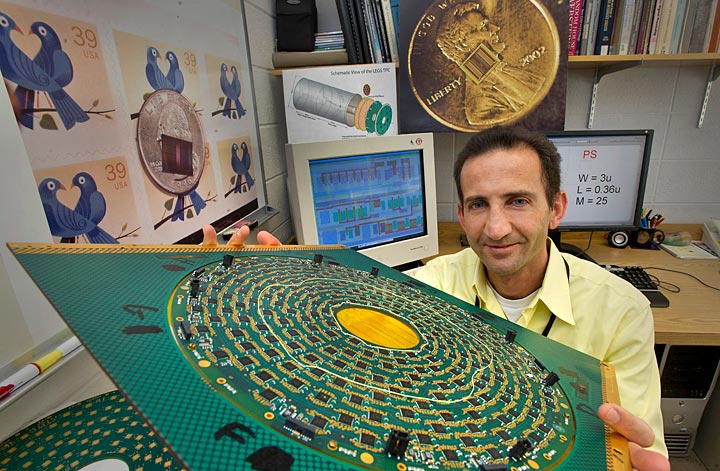 UPTON, NY — Gianluigi De Geronimo, a leading electrical engineer who designs unique, state-of-the-art microelectronics at the U.S. Department of Energy's (DOE) Brookhaven National Laboratory, was honored by Battelle as an "Inventor of the Year" at Battelle's annual recognition program in Columbus, Ohio, on April 19. Battelle is the global science and technology organization that manages Brookhaven Lab with Stony Brook University through the company Brookhaven Science Associates. 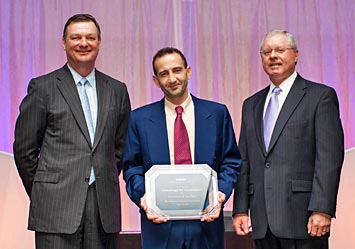 Battelle's Inventor of the Year award is given to recognize those who have made significant scientific or engineering contributions with important societal or financial impacts. De Geronimo was one of four awardees selected in 2013.

"I am honored to be selected as a Battelle Inventor of the Year and I would like to acknowledge the dedicated efforts of our design team and numerous collaborators," said De Geronimo. "Our work with microelectronics helps us see what would otherwise be invisible, and can shape and even save lives."

"Our work with microelectronics helps us see what would otherwise be invisible, and can shape and even save lives."

At Brookhaven, De Geronimo designs application specific integrated circuits (ASICs) for science experiments and tools for national security and medical imaging. He leads the ASIC development group, which is made up of approximately five electrical engineers, in Brookhaven Lab's Instrumentation Division. ASICs that De Geronimo and the group designed are found in the ProxiScan™ camera that can identify prostate cancer in its early stages as well as the high resolution, x-ray "Maia" detector used to map specific elements in materials and artwork, such as Rembrandt's painting "Old Man With a Beard." Their ASIC designs are also to be implemented in equipment upgrades for the ATLAS detector at the Large Hadron Collider in Europe.

De Geronimo and the ASICs in Action

While the ASICs De Geronimo designs are developed for detectors with specific applications, they operate similarly to a digital camera that detects light to create a photograph. In the aftermath of an ionizing event—particles collide or a decaying source emits radiation—the particles or photons researchers look for emerge and hit a pixel in a detector. This generates electrons that form an electrical signal in a corresponding channel within the ASIC system. Similar signals from other pixels in the sensor are combined to create data or images that scientists, emergency responders, doctors, or researchers can use for their task at hand.

De Geronimo explained, "Developing a new ASIC for an experiment or application typically takes two to three years. It is a highly specialized process that involves multiple design phases, fabrication—which is done at industrial foundries off site—and testing, with possible revision cycles along the way.

"This is exciting, challenging work," De Geronimo continued. "We can pack hundreds of thousands of transistors—sometimes as many as one million—in areas of just a few square millimeters. We also strive to improve performance by reducing power usage and filtering out unwanted noise."

New Challenges and New ASICs Ahead

Currently, De Geronimo is designing ASICs for the Long Baseline Neutrino Experiment, an experiment to study elusive particles called neutrinos that could help determine how the universe evolved after the Big Bang and why there is more matter than antimatter. These ASICs will operate in a 10,000-ton detector filled with liquid argon and chilled to about -200 degrees Celsius.

De Geronimo earned a Ph.D. in electronics and communications from Milan Polytechnic in Italy in 1997. That same year, he began working at Brookhaven Lab's Instrumentation Division. De Geronimo holds or shares 13 patents. He resides in Syosset, NY.

This work is funded by the DOE Office of Science, the Defense Threat Reduction Agency, and NASA, in addition to the "Work for Others" program through Brookhaven Lab's Office of Technology Commercialization and Partnerships.