The following news release on Early Career Research Program Funding was issued by the U.S. Department of Energy. One of the recipients is Lijuan Ruan, a physicist at DOE's Brookhaven National Laboratory. For more on Ruan's research, see the sidebar below, or contact Karen McNulty Walsh, (631) 344-8350, kmcnulty@bnl.gov. DOE News Media Contact: (202) 586-4940.

Lijuan Ruan, a physicist at the Relativistic Heavy Ion Collider (RHIC) at Brookhaven Lab, will apply her funding to probe the properties of quark-gluon plasma 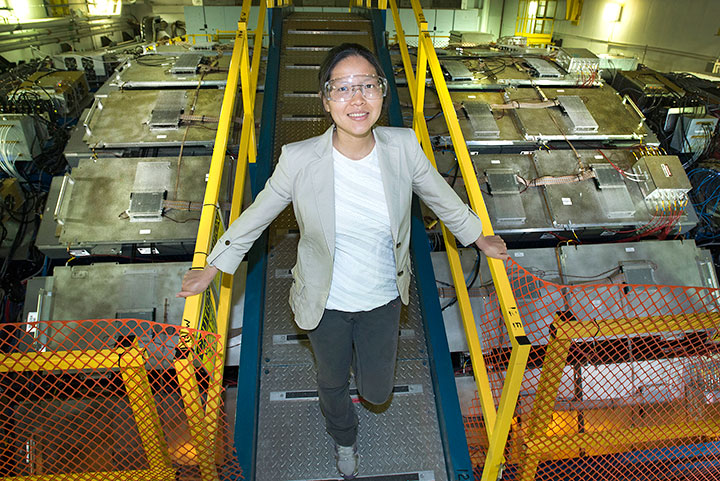 Lijuan Ruan, a physicist at the Relativistic Heavy Ion Collider (RHIC) at Brookhaven National Laboratory, is one of 61 scientists to receive Early Career Research Program funding from DOE. She stands beside components of the Muon Telescope Detector she helped to build at RHIC's STAR experiment. See the bottom of this page for details on her work.

WASHINGTON – Underscoring the Obama Administration's commitment to investing in innovation and the American workforce, Acting Secretary of Energy Daniel Poneman today announced that 61 scientists from across the nation will receive up to $15.3 million in funding for research as part of the Energy Department's Early Career Research Program.  The effort, now in its fourth year, is designed to bolster the nation's scientific workforce by providing support to exceptional researchers during the crucial early career years, when many scientists do their most formative work.

This award … will allow my colleagues and me to use this new device … to probe the fundamental properties of the quark-gluon plasma created at RHIC.

"The Early Career Research Program reflects the Administration's strong commitment to creating jobs and new industries through scientific innovation," said Acting Secretary Poneman.  "Strong support of scientists early in their careers is crucial to sustaining America's scientific workforce and assuring U.S. leadership in discovery and innovation for many years to come."

Under the program, university-based researchers will receive at least $150,000 per year to cover summer salary and research expenses.  For researchers based at the Department's national laboratories where the Department typically covers the full salary and expenses of laboratory employees, grants will be at least $500,000 per year to cover year-round salary plus research expenses.  The funding is for the first year of planned five-year research grants, subject to congressional appropriations.

Awardees were selected from a pool of 770 university- and national laboratory-based applicants. A list of the 61 awardees, their institutions, and titles of research projects is available HERE.

To be eligible for the award, a researcher must be an untenured, tenure-track assistant or associate professor at a U.S. academic institution or a full-time employee at a national laboratory who has received a Ph.D. within the past ten years.  Research topics are required to fall within one of the Department's Office of Science's six major focus areas: 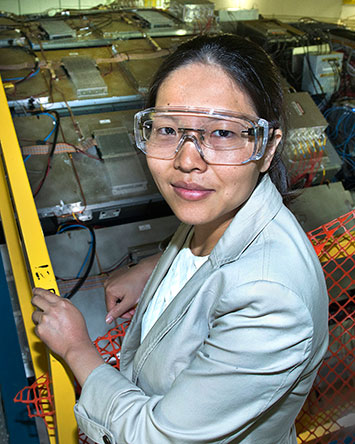 Brookhaven Lab physicist Lijuan Ruan, a member of the STAR collaboration at the Relativistic Heavy Ion Collider (RHIC), was selected by DOE's Office of Nuclear Physics and recognized for "Mid-rapidity Di-lepton Measurements at RHIC with the Muon Telescope Detector at STAR."

For the past two years, Ruan has led the construction of this new detector component, which is built to measure muons, heavier counterparts of electrons. The detector allows scientists to measure muons emitted from collisions at RHIC—a particle collider that recreates a type of matter that existed in the early universe—in the same space where STAR has already measured electrons. By comparing muon-muon to electron-muon pairs, Ruan is hoping to separate the production of different kinds of quarks (known by the whimsical names of "charm" and "beauty") from the "shine" of this early-universe matter, known as quark-gluon plasma. That would allow for precise measurements of the temperature of the matter created at RHIC.

Muon pairs also allow for precise separation of the various bound states of beauty and charm. Depending on the plasma temperature, some of these bound states will melt, while others will remain bound. This precise pattern of melting allows for studying the properties of the quark-gluon medium at RHIC.

The Early Career Research Funding Award will allow Ruan to fully reap the physics potential of this new device.

"I am deeply honored and so excited to receive this award," said Ruan. "It will allow my colleagues and me to use this new device, the Muon Telescope Detector at STAR, to probe the fundamental properties of the quark-gluon plasma created at RHIC, such as the temperature. We will be able to study this property using several different observables."