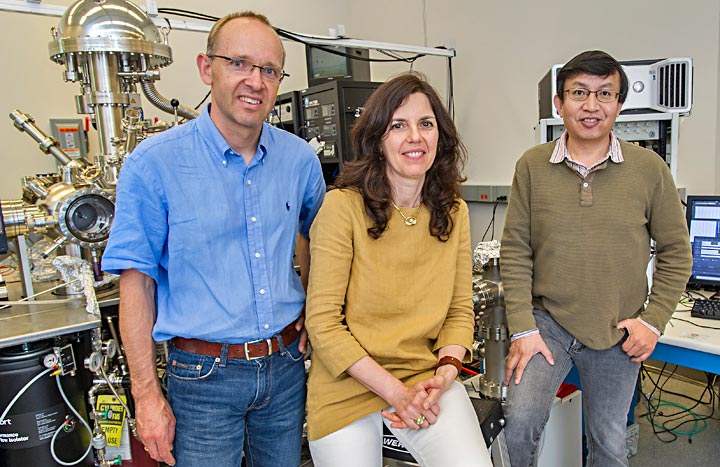 Brookhaven Lab physicists Peter Sutter, Eli Sutter, and Xiao Tong (left to right) with one of the Center for Functional Nanomaterials instruments used to characterize the new nanoparticle structures.

Now, scientists at the U.S. Department of Energy's Brookhaven National Laboratory have discovered a process of creating uniquely structured gold-indium nanoparticles that combine high stability, great catalytic potential, and a simple synthesis process. The new nanostructures—detailed online June 10 in the Proceedings of the National Academy of Sciences—might enhance many different commercial and industrial processes, including acting as an efficient material for catalytic converters in cars.

"When we saw these new nanoparticles with gold throughout their amorphous shells, we immediately recognized the exceptional potential of the material."

"We discovered a room-temperature process that transforms a simple alloy into a nanostructure with remarkable properties," said physicist Eli Sutter, lead author on the study. "By exposing the gold-indium alloy nanoparticles to air, ambient oxygen was able to drive an oxidation reaction that converted them into an active core-shell structure."

Larger chunks of gold show the lowest chemical reactivity of all metals, but divided into discrete nanoparticles, gold can become a highly active chemical catalyst. But keeping gold in this active state is an ongoing challenge. Under even moderate heat, the tiny gold particles tend to sinter—fusing together into much larger pieces—and lose that crucial reactivity. Linking gold with other elements, however, can both increase durability and retain catalyst qualities—but only if the structure is perfect.

"When we saw these new nanoparticles with gold throughout their amorphous shells, we immediately recognized the exceptional potential of the material," said physicist and study coauthor Peter Sutter. "The presence of gold embedded in the outermost atomic layers of the oxide shell not only excites us as scientists, but it is key to the catalytic activity and enhanced stability of the new material." 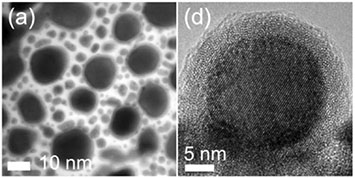 Transmission electron microscopy (TEM) images of the gold-indium alloy nanoparticles at room temperature. (A) shows an overview of multiple particles, while (D) shows a high-resolution TEM image of one nanoparticle's crystalline gold-indium core surrounded by the amorphous and catalytic oxide shell.

The Brookhaven Lab researchers were studying oxidation processes through which metals and alloys combine with oxygen when they made the discovery. For this study, they examined alloys of a noble metal and a non-noble metal through a remarkably simple reaction technique: giving gold-indium nanoparticles a little room to breathe. Once nanoparticles of the metal alloy were exposed to oxygen, highly reactive shells of gold-indium oxide formed across their surfaces.

"Conventional wisdom would say that oxidation should push the gold atoms into the center while pulling the less noble indium to the surface, creating a noble metal core that is surrounded by a shell of non-reactive indium-oxide," Peter Sutter said. "Instead, the oxygen actually penetrated the alloy. After oxidation, the alloy core of the nanoparticles was encapsulated by a newly formed thin shell of mixed gold-indium oxide."

Trapping gold in the amorphous oxide shell retains its catalytic properties and prevents the gold from sintering and becoming inert. The new nanostructures proved capable of converting oxygen and carbon monoxide into carbon dioxide, demonstrating their activity as a catalyst.

"The indium and gold in the shell are not mobile, but are frozen in the amorphous, oxide," Eli Sutter said. "Importantly, the structural integrity holds without sintering at temperatures of up to 300 degrees Celsius, making these remarkably resilient compared to other gold nanocatalysts."

The research was conducted at Brookhaven Lab's Center for Functional Nanomaterials (CFN), whose unique facilities for nanoscale synthesis and characterization proved central to the discovery of this new process.

"The CFN brings a wide range of state-of-the-art instruments and expertise together under one roof, accelerating research and facilitating collaboration," Eli Sutter said. "We used transmission electron microscopy to characterize the structures and their composition, x-ray photoelectron spectroscopy to determine the chemical bonding at the surface, and ion-scattering spectroscopy to identify the outermost atoms of the nanoparticle shell."

Further investigations will help determine the properties of the gold-indium oxide particles in different catalytic reactions, and the same oxidation process will be applied to other metal alloys to create an entire family of new functional materials.