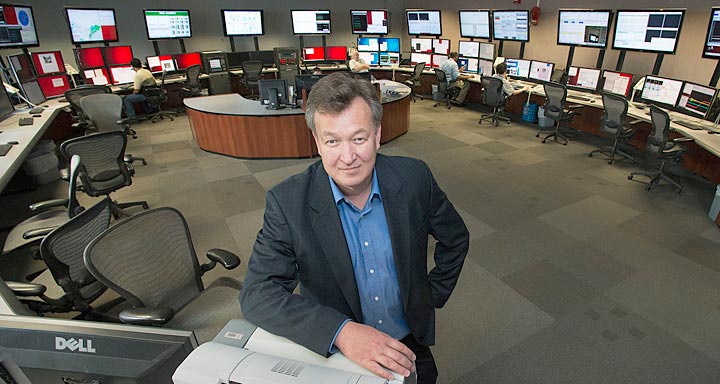 STONY BROOK AND UPTON, NY, June 19, 2013 — Dmitri "Dima" Kharzeev, a Professor of Physics in the Department of Physics and Astronomy at Stony Brook University, with a joint appointment as a Senior Scientist in the Physics Department at the U.S. Department of Energy's Brookhaven National Laboratory (BNL), has been awarded the Humboldt Research Award, a prestigious international award issued by the Alexander von Humboldt Foundation in Bonn, Germany, for scientific excellence in his respective field. The award comes with a prize of €60,000 – nearly $80,000 USD – and the opportunity to collaborate with German researchers at Goethe University in Frankfurt and elsewhere. Professor Kharzeev joins the 13 other Stony Brook Department of Physics and Astronomy faculty members and 10 Brookhaven National Laboratory physicists who have received this award since 1974.

Professor Kharzeev was chosen for predicting the Chiral Magnetic Effect (CME) in the quark-gluon plasma — a form of matter that existed in the very early universe, which is recreated for the study of its subatomic components at Brookhaven's Relativistic Heavy Ion Collider (RHIC). CME is the phenomenon of electric charge separation induced by topological configurations of gluon fields in the presence of magnetic field; both are present in heavy ion collisions at RHIC. CME opens a possibility to observe directly the effect induced by non-trivial topology of Quantum Chromo-Dynamics (QCD), the theory that describes the interactions of quarks and gluons. Topological effects in QCD may be responsible for much of the properties of the physical world, including 99% of the visible mass of the universe.

"I am humbled by this honor, and would like to thank my colleagues at Stony Brook University and Brookhaven National Laboratory for their support and contributions to the research for which I am being recognized. Joining the family of Humboldt award winners will allow me to advance the theory of chiral fluids in nuclear and condensed matter physics in collaboration with my colleagues in Germany and elsewhere," said Professor Kharzeev.

"Professor Kharzeev has distinguished himself among his colleagues and continues to make important contributions to the scientific community through his work in theoretical physics," said Stony Brook University President Samuel L. Stanley Jr., MD. "To be selected by the Alexander von Humboldt Foundation underlines the fact that Dima is an outstanding scholar. On behalf of the entire University community, I commend him for this honor."

"Identifying the CME is important as a similar effect exists within the physics of solids and could potentially enable the non-dissipative transfer of energy and information through chiral materials such as graphene and semi-metals," said Professor Kharzeev. "The ability to transfer energy and information without dissipation could potentially lead to new fields in electronics."

I am humbled by this honor, and would like to thank my colleagues at Stony Brook University and Brookhaven National Laboratory for their support and contributions to the research.

"The Humboldt award is a well-deserved recognition of Dima's outstanding achievements as one of the foremost intellectual leaders in theoretical physics at Brookhaven and Stony Brook," said Berndt Mueller, Associate Laboratory Director for Nuclear and Particle Physics at BNL. "His ideas about the role of magnetic effects in topological properties of chiral quantum systems have been an important driver of the experimental program at RHIC and have tremendous potential for applications in materials science. The award will not only allow Dima to strengthen his ties to the German research community, but also allow him to attract brilliant young postdocs from Germany to Stony Brook and Brookhaven."

Professor Kharzeev joined the Stony Brook University Department of Physics and Astronomy in 2010 as a Full Professor. Educated at Moscow State University; he received his PhD in particle and nuclear physics there in 1990. He then spent two postdoctoral years in the Italian National Institute of Nuclear Physics, three years in the Theory Division at CERN in Geneva, Switzerland, and a year at Bielefeld University in Germany. In 1997 he joined the newly created RIKEN-BNL Research Center at BNL under direction of Prof. T.D. Lee, a Nobel laureate. In 2000 he became a Scientist with tenure at BNL; he had been the head of the Nuclear Theory group there from 2004 until 2010. Under his leadership the BNL group has become the highest ranked nuclear theory group in the US DOE national laboratories system. Since 2007, he has also been an adjunct professor at Yale University. He is a Fellow of the American Association for the Advancement of Science and the American Physical Society. He has published 140 papers in refereed international scientific journals and more than 200 papers overall.

In condensed matter physics and nanotechnology, Professor Kharzeev is involved in research on the properties of graphene (a novel nanomaterial which is a single atomic layer of carbon atoms arranged in a honeycomb lattice) and its use in nanoscale spintronic devices. This work has led to a recent US patent on Graphene-Magnet Multilayer (GMM) technology, with Alexei Tsvelik and Igor Zaliznyak. According to Professor Kharzeev, GMM technology has the potential to become the base for re-writable nanoscale spintronic processors and storage devices.

About the Department of Physics & Astronomy at Stony Brook University

The Department of Physics & Astronomy at Stony Brook University offers a diverse program and consistently ranks amongst the best and largest in the country. In their latest departmental rankings (2010), The US News and World listed the department as 23rd in the nation out of 145 programs in the United States; with the Nuclear Physics program ranked 4th. The 2010 NRC ranking which is the most prestigious ranking in the US, ranks the Graduate School among the top 15 programs in the country. The department shares faculty with the CN Yang Institute for Theoretical Physics, a leading center for high energy physics, string theory and statistical mechanics; the Simons Center for Geometry and Physics, a research center devoted to furthering fundamental knowledge in geometry and theoretical physics, especially knowledge at the interface of these two disciplines; and the Laufer Center for Physical and Quantitative Biology, with an aim to advance biology and medicine through discoveries in physics, mathematics and computational science. Current and past faculty members have received numerous top honors in the field, including the Nobel Prize, National Medal of Science, Niels Bohr Institute Prize, Dirac Prize, CAREER Awards, Humboldt Awards, PECASE Awards, Asahi Prize, Dannie Heineman Prize for Mathematical Physics, Guggenheim, Sloan, AAAS, IEEE, American Physical Society and Royal Danish Academy Fellowships, and more.

From its inception, Brookhaven Lab has had a major focus on physics, including the subfields of nuclear, particle, and condensed matter physics. Research conducted at the Lab has garnered worldwide recognition, including five Nobel Prizes in physics and many other prestigious awards, including two Wolf Prizes, the W.H. Panofski Prize, the Tom Bonner Prize in Nuclear Physics, the Lawrence Memorial Award, the Sakurai Prize, the Humboldt Bessel Prize, numerous Humboldt Research Awards, the George Valley and IUPAP Nuclear Physics Prizes, as well as recognition for early career scientists and numerous fellowships in the American Physical Society and American Association for the Advancement of Science. The Lab hosts the Relativistic Heavy Ion Collider (RHIC), the last operating collider in the U.S., and the RIKEN-BNL Research Center, which is dedicated to the study of strong interactions, including spin physics, lattice QCD and RHIC physics through the nurturing of a new generation of young physicists. In addition to hosting the research at RHIC, Brookhaven physicists play leadership roles in many global endeavors, including the search for the Higgs boson at the Large Hadron Collider in Europe, neutrino experiments including the Daya Bay experiment in China, and cosmological explorations of dark matter and dark energy. For more about Brookhaven's physics research, see: http://www.bnl.gov/science/QCD-matter.php, http://www.bnl.gov/science/physics.php, and http://www.bnl.gov/physics/history/.