The following press release on advancing nanocatalyst structure and performance was issued by the University of Pennsylvania. Scientists Rosa Diaz and Eric Stach of Brookhaven National Laboratory's Center for Functional Nanomaterials (CFN) combined results from two electron microscopes to reveal crucial information on the size and configuration of the catalysts. The collaboration correlated the CFN structural analysis with reactivity tests to determine the active sites of the catalysts. For more information on Brookhaven's role, see the sidebar below or contact Justin Eure, jeure@bnl.gov.

University of Pennsylvania Media contact: Evan Lerner at elerner@upenn.edu or 215-573-6604 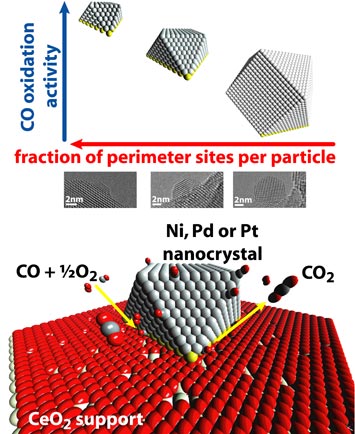 By precisely designing a series of nanocrystals with different sizes, shapes and compositions, researchers showed that the efficiency of certain catalysts depends on the interface between their two materials. (Image: Matteo Cargnello)

Catalysts are everywhere. They make chemical reactions that normally occur at extremely high temperatures and pressures possible within factories, cars and the comparatively balmy conditions within the human body. Developing better catalysts, however, is mainly a hit-or-miss process.

Now, a study by researchers at the University of Pennsylvania, the University of Trieste and Brookhaven National Laboratory has shown a way to precisely design the active elements of a certain class of catalysts, showing which parameters are most critical for improving performance.

This highly controlled process could be a new paradigm for fine-tuning catalysts used in everything from making new materials to environmental remediation.

The research is the result of a highly collaborative effort between the three institutions. It was led by Christopher Murray, a Penn Integrates Knowledge Professor with appointments in the Department of Chemistry in the School of Arts and Sciences and the Department of Materials Science and Engineering in the School of Engineering and Applied Science, and Matteo Cargnello, a postdoctoral fellow in Murray's group. Cargnello was a graduate student in Paolo Fornasiero's group at the University of Trieste when the research began and also worked with Raymond Gorte, professor in the Department of Chemical and Biomolecular Engineering, after coming to Penn. Penn graduate students Vicky Doan-Nguyen and Thomas R. Gordon, as well as Brookhaven's Rosa Diaz and Eric Stach, also contributed to the study.

"Improving our understanding about the active components of these catalysts can tell us what to emphasize in future systems."

It was published in the journal Science.

Murray's team set out to improve the process for designing a class of reaction-promoting materials known as supported catalysts. These catalysts are made of two different solid substances—one supporting the other—but existing techniques for fabricating them don't provide much in the way of precisely controlling their parameters. Because of the lack of uniformity in conventional catalysts, it can be difficult to tell which aspects of their combination lead to better systems.

"In putting together materials design, functional testing and state-of-the art-characterization tools, we're looking to develop a feedback loop," Murray said. "Improving our understanding about the active components of these catalysts can tell us what to emphasize in future systems."

"This research needed the combination of these two advanced, aberration-corrected microscopes—something that can be done at very few locations in the world," Stach said. "The high brightness of the Hitachi STEM allowed us to describe the statistical nature of the particle distribution, while the ETEM allowed us to confirm that those configurations held in elevated temperatures and pressures."

Capitalizing on the Murray lab's expertise in creating nanocrystals with precisely defined sizes, shapes and compositions, the researchers created a series of supported catalysts and tested them against one another on a model catalytic reaction: the oxidation of carbon monoxide.

This basic example of catalysis is also common in real-world applications, as it turns carbon monoxide, which is toxic, into carbon dioxide. Carbon monoxide is a common byproduct of the incomplete combustion of organic compounds, so it is produced in car engines and many industrial processes. Catalytic filters and converters are often required by law to cut down carbon monoxide pollution.

Catalysts are often used for this reaction as simply adding carbon monoxide and oxygen in an enclosed chamber is not sufficient to cause them to combine. Without additional pressure or heat—up to several hundreds of degrees Celsius—the gas molecules do not collide frequently or energetically enough to produce carbon dioxide.

Adding a catalyst is a more efficient alternative to adding heat or pressure. The catalyst materials are not consumed during the reaction but provide a template of sorts that helps the reactants find one another and bond. This active material is typically a metal, as metallic elements are able to form many kinds of bonds. Increasing the surface area of this material increases the reaction rate, as it provides more places for the reacting molecules to bond, so the metal is often broken down to as small particles as possible.

These small metal particles are often deposited on the second material—a support—which is typically made of a metal oxide. Supports are generally inert, simply providing a thermally stable platform for the metal particles, but some are "active" in that they are also involved in the bonds that speed along the catalytic reaction. For carbon monoxide oxidation using active supports, it is theorized that the metal particles hold carbon monoxide molecules while the support donates oxygen molecules, bringing the two gases together in a more consistent and faster way than if both had to bond to the metal alone.

This theory would suggest that increasing the percentage of atoms at the interface between the metal particles and the support is more important than increasing the surface area of the metal.

"For this family of supported catalysts, however, we had only fragmentary knowledge about what regions of the whole catalytic system are critically active," Murray said. "Now, with better tools and the ability to make better samples, we can go in and pull out the things that really matter."

To test the theory, the researchers made nanocrystals of three sizes with three metals: nickel, palladium and platinum. They then deposited these nanocrystals on both an inert support, aluminum oxide, and an active support, cerium oxide. Transmission electron microscopy, performed at Brookhaven, was critical in enabling the researchers to confirm each of the 18 combinations came together correctly prior to comparing their performances in the carbon monoxide oxidation reaction.

The results began to confirm their hypothesis.

"For the aluminum oxide support," Cargnello said, "there was basically no difference in the catalytic activity between the different sizes of particles when normalized per number of metal atoms, which is what the literature has suggested for the past few decades. The surprise came when, in Trieste, we tested the cerium oxide supported samples, where we found that the smaller particles were more active than the larger ones, on the same basis. That means that structural differences in the particles were related to the different active sites for the reaction."

Returning the 18 combinations to Brookhaven, the researchers used the transmission electron microscope to create a computer model of the interfaces between the nanocrystals and supports. Able to count the individual atoms in this model, they saw that, the greater the proportion of a nanocrystal's atoms were at the interface with the support, the better it performed.

"We saw this proportion made a much bigger difference in the catalyst performance than the material the nanocrystals were made of," Cargnello said. "This is important in that nickel is much less expensive than platinum and palladium, so, if we can figure out how to fine-tune nickel nanocrystals, we may be able to make much cheaper catalysts that work just as well."

More than showing a path to improving this particular reaction, the study represents a new way of studying catalytic reactions in general, as well as a more straight-forward way of designing the materials at their core.

"We're flipping the vision of catalysis," Cargnello said. "Usually, people see that a material performs well, then study its structure to determine why it behaves the way it does. Here, we're preparing the structure based on how we think the material is going to be behave, then see how it performs."

The research was supported by European Cooperation in Science and Technology, the U.S. Department of Energy through its Office of Basic Energy Sciences and its Advanced Research Projects Agency, the National Science Foundation through Penn's Nano/Bio Interface Center and the Air Force Office of Scientific Research.