This talk has been postponed. A new date has not been determined. 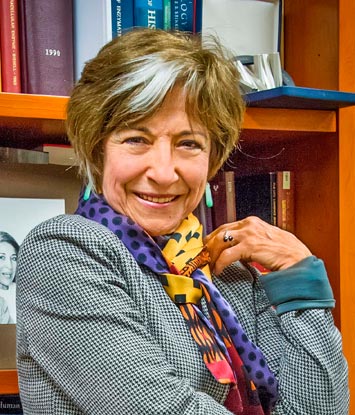 UPTON, NY — Mina Bissell, a distinguished scientist at Lawrence Berkeley National Laboratory and well known for her contributions to breast cancer research, will give a talk, "Wife, Mother, Scientist — Or is it The Other Way Around?" at the U.S. Department of Energy's Brookhaven National Laboratory on Wednesday, September 18, at 4 p.m. in the Physics Department conference room, Building 510. During her talk, Bissell will discuss how women can balance their family responsibilities and still have a successful career in research. Sponsored by Brookhaven Women in Science (BWIS) and Brookhaven Science Associates, the talk is free and open to the public. All are welcome. Visitors to the Laboratory 16 or older must carry photo I.D.

Bissell is a pioneer in the study of the role of extracellular matrix (ECM) and microenvironment in regulation of tissue-specific function with special emphasis in breast cancer, where she has changed some established paradigms.  In her talk at Brookhaven, she will address the age-old question — why do we get cancer? For years, conventional belief was that cancer begins solely by DNA mutation that causes cells to run amok and replicate chaotically. For thirty years, Bissell has conducted research that has proven that cancer also lies outside of the cell and is caused by the interaction between cancer cells and the surrounding cellular microenvironment.

Mina Bissell earned an A.B. with honors in chemistry from Harvard/Radcliffe College and a Ph.D. in bacterial genetics from Harvard University. She joined the Lawrence Berkeley National Laboratory in 1972, became director of Cell & Molecular Biology in 1988, and was appointed director of Life Sciences in 1992. Upon stepping down as the Life Sciences Division Director, she was named a Distinguished Scientist. She is also a U.S. Department of Energy's Office of Biological and Environmental Research Distinguished Scientist Fellow in Life Sciences.

Bissell has authored more than 366 publications, is a member of nine international scientific boards, and is on the editorial board of many scientific journals. She has given more than 90 "named and distinguished" lectures. She is the recipient of many awards, including the Lawrence Award and medal, the Mellon Award from the University of Pittsburgh, the Eli Lilly/Clowes Award from American Association for Cancer Research (AACR), the first "Innovator Award" of the U.S. Department of Defense for breast cancer research, the Brinker Award from Komen Foundation, the Discovery Health Channel Medical Honor and medal, the H. Lee Moffitt Cancer Center Ted Couch Lectureship and Award, and the Pezcoller Foundation–AACR International Award for Cancer Research.

In 2011, Bissell received the Breast Cancer Research Foundation's Jill Rose Award and the Susan Bulkeley Butler Leadership Excellence Award, followed by the 2012 AACR Distinguished Lectureship in Breast Cancer Research and the Lifetime Achievement Award, Lawrence Berkeley National Laboratory. In 2010, she was awarded the American-Italian Cancer Foundation's Alexander Bodini Foundation Prize for Scientific Excellence in Medicine. In 2009, she received the Rothschild-Mayent Fellowship by Institut Curie, and in 2008, she received the Excellence in Science Award from the Federation of American Societies for Experimental Biology and the American Cancer Society's Medal of Honor for Basic Research Award. In 2007, she received the Inserm International Annual Award.