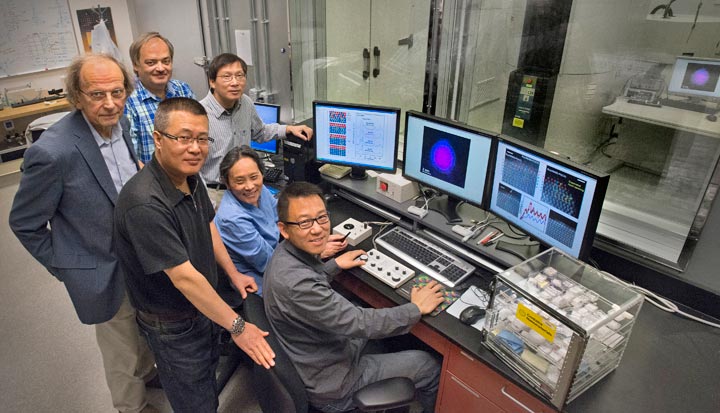 Now, scientists at the U.S. Department of Energy's (DOE) Brookhaven National Laboratory—in research published online September 18, 2013 in the journal Nature Communications—have created a high-performing nanocatalyst that meets all these demands. The novel core-shell structure—ruthenium coated with platinum—resists damage from carbon monoxide as it drives the energetic reactions central to electric vehicle fuel cells and similar technologies.

Catalysts inside fuel cells pry free the intrinsic energy of hydrogen molecules and convert it into electricity. Platinum performs exceptionally well with pure hydrogen fuel, but the high cost and rarity of the metal impedes its widespread deployment. By coating less expensive metals with thin layers of platinum atoms, however, scientists can retain reactivity while driving down costs and creating core-shell structures with superior performance parameters. 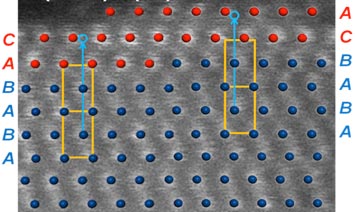 The carbon monoxide impurities in hydrogen formed from natural gas present another challenge to scientists because they deactivate most platinum catalysts. Ruthenium—less expensive than platinum—promotes carbon monoxide tolerance, but is more prone to dissolution during fuel cells' startup/shutdowns, causing gradual performance decay.

"We set out to protect ruthenium cores from dissolution with complete platinum shells just one or two atoms thick," Wang said. "Previous surface science studies revealed remarkable variation of surface properties in this core-shell configuration, suggesting the need and the opportunity to perfect the recipe with precise control."

Doubts existed about whether or not a highly ordered ruthenium core was even possible with a platinum shell—previously synthesized nanoparticles exhibited a weakened crystal structure in the ruthenium.

"Luckily, we found that the loss of ruthenium structure was due to defect-mediated interlayer diffusion, which is avoidable," Wang said. "By eliminating any lattice defects in ruthenium nanoparticles before adding platinum, we preserved the crucial, discrete atomic structure of each element."

The scalable and inexpensive synthesis method uses ethanol—a common and inexpensive solvent—as the reductant to fabricate the nanoparticle core and shell. The sophisticated process requires no other organic agents or metal templates.

"Simply adjusting temperature, water, and acidity of the solutions gave us complete control over the process and yielded remarkably consistent ruthenium nanoparticle size and uniform platinum coating," said Brookhaven Lab chemist Radoslav Adzic, another coauthor on the study. "This simplicity offers high reproducibility and scalability, and it demonstrates the clear commercial potential of our method."

"We took the completed catalysts to other facilities here at the Lab to reveal the exact details of the atomic structure," Wang said. "This kind of rapid collaboration is only possible when you work right next door to world-class experts and instruments."

Scientists at Brookhaven Lab's National Synchrotron Light Source (NSLS) revealed the atomic density, distribution, and uniformity of the metals in the nanocatalysts using a technique called x-ray diffraction, where high-frequency light scatters and bends after interacting with individual atoms. The collaboration also used a scanning transmission electron microscope (STEM) at Brookhaven's Center for Functional Nanomaterials (CFN) to pinpoint the different sub-nanometer atomic patterns. With this instrument, a focused beam of electrons bombarded the particles, creating a map of both the core and shell structures.

"We found that the elements did not mix at the core-shell boundary, which is a critical stride," said CFN physicist Dong Su, coauthor and STEM specialist. "The atomic ordering in each element, coupled with the right theoretical models, tells us about how and why the new nanocatalyst works its magic."

Determining the ideal functional configuration for the core and shell also required the use of the CFN's expertise in computational science. With density functional theory (DFT) calculations, the computer helps identify the most energetically stable platinum-ruthenium structure.

"The DFT analysis connects the dots between performance and configuration, and it corroborates our direct observations from x-ray diffraction and electron microscopy," Adzic said.

Ballard Power Systems, a company dedicated to fuel cells production, independently evaluated the performance of the new core-shell nanocatalysts. Beyond testing the low-platinum catalysts' high activity in pure hydrogen, Ballard looked specifically at the resistance to carbon monoxide present in impure hydrogen gas and the dissolution resistance during startup/shutdown cycles. The bilayer nanocatalyst exhibited high durability and enhanced carbon monoxide tolerance—the combination enables the use of impure hydrogen without much loss in efficiency or increase in catalyst cost.

The nanocatalyst also performed well in producing hydrogen gas through the hydrogen evolution reaction, leading to another industrial partnership. Proton Onsite, a company specializing in splitting hydrogen from water and other similar processes, has completed feasibility tests for deploying the technology in their production of water electrolyzers, which will now require about 98 percent less platinum.

"Water electrolyzers are already on the market, so this nanocatalyst can deploy quickly," Wang said. "When hydrogen fuel cell vehicles roll out in the coming years, this new structure may accelerate development by driving down costs for both metal catalysts and fuel."

The National Synchrotron Light Source (NSLS) provides intense beams of infrared, ultraviolet, and x-ray light for basic and applied research in physics, chemistry, medicine, geophysics, and environmental and materials sciences.  Supported by the Office of Basic Energy Sciences within the U.S. Department of Energy, the NSLS is one of the world's most widely used scientific facilities. For more information, visit www.nsls.bnl.gov.