The following news release was issued by the Royal Swedish Academy of Sciences. The Academy has awarded Yigong Shi, Tsinghua University in Beijing, the 2014 Gregori Aminoff Prize in recognition of his work on crystallographic studies of proteins and protein complexes that regulate programmed cell death. Starting in the 1990s, Shi and his team have done extensive crystallographic data collection using multiple beamlines at Brookhaven National Laboratory's National Synchrotron Light Source (NSLS). Lonny Berman, a former staff scientist at beamline X25, commented, "This prize confirms the importance of Yigong's results, which were recognized early on as exceptional and groundbreaking by NSLS staff. We have been pleased to support his work." Other NSLS users have won the Aminoff Prize in recognition of their research carried out at NSLS: Hokwang (David) Mao in 2005, Wayne Hendrickson in 1997 and Phil Coppens in 1996. 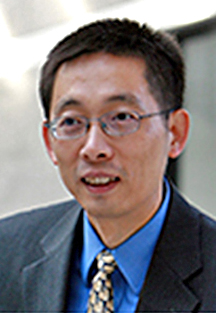 The Royal Swedish Academy of Sciences has dedicated the award the Gregori Aminoff Prize in Crystallography 2014 to: Yigong Shi Tsinghua University, Beijing, China

In order for an organism to survive, its cells need to be replaced regularly; for each cell that dies a new cell has to be created. Programmed cell death (apoptosis) is thus an important mechanism for all living organisms as the amount of cells in the organism needs to be constant. Each day billions of cells die due to apoptosis and equilibrium is maintained due to the same amount of cells being born. The process of apoptosis is very carefully regulated by a large amount of pro- and anti-apoptotic proteins that interplay in a very intricate and complex manner.

Shi's crystallographic studies of the proteins that are part of the apoptotic machinery have not only resulted in the mapping of the proteins' three-dimensional structures, but have also led to a detailed understanding of the mechanisms that regulate the system. Shi has studied apoptotic mechanisms in human cells, as well as in fruit flies (Drosophila melanogaster) and roundworms (Caenorhabditis elegans). Yigong Shi and his collaborators have mapped the complex structural foundation for the activation of pro-apoptotic caspase enzymes, i.e., the enzymes that activate cell death, and they have demonstrated the significance of a carefully regulated interplay between different proteins in the cell. Chi has also contributed many pioneering insights to other scientific fields. His research team has, for instance, determined the structure of one variant of the presenilin family, a group of transmembrane enzymes that among other things play a part in the genesis and development of Alzheimer's disease.

The Prize will be awarded at the Royal Swedish Academy of Sciences' Annual Meeting on 31 March 2014.

Yigong Shi, Chinese citizen. Born 1967. He studied Biology and Mathematics at Tsinghua University, Beijing, China and holds a PhD in Molecular Biophysics from Johns Hopkins University School of Medicine, Baltimore, MD, USA. Postdoctoral studies were undertaken at the Memorial Sloan-Kettering Cancer Center, New York, NY, USA. For several years he held the title of Professor at Princeton University, NJ, USA, before returning to China in 2008. He is currently Professor and Dean at Tsinghua University, where he has established an active and successful research team.

Crystallography is the science that explores the atomic composition of solids. In order to reveal the atomic structure of a crystal, scientists use the method of X-ray crystallography; an X-ray is directed towards a crystal and this yields a diffraction pattern that can be transformed into a 3D-model of the crystal. This technique is frequently used in Geology, Physics, Chemistry, Biology, Medicine and Materials Science and Engineering, in order to determine the properties of minerals as well as protein and DNA structures, and for developing new sustainable materials.