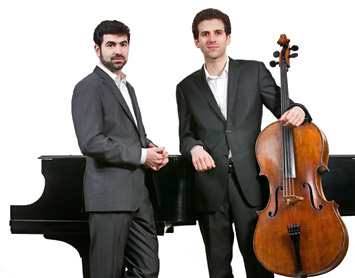 UPTON, NY —  Hailed as "a pair of adventurous young talents" by Time Out New York, the duo of cellist Nicholas Canellakis and pianist/composer Michael Brown are said to captivate audiences with their superb musicianship and thrilling performances.  The Duo will perform at the U.S. Department of Energy's Brookhaven National Laboratory on Wednesday, March 12, at noon in Berkner Hall. Sponsored by Brookhaven Science Associates, the company that manages the Lab, the concert is free and open to the public. Reservations are not required. All visitors to the Laboratory 16 and older must bring a photo ID.

Nicholas Canellakis has established himself as one of the most sought-after and innovative cellists of his generation, performing throughout the United States and Europe to critical acclaim. The New York Times praised his playing as "impassioned" and "soulful," with "the audience seduced by Mr. Canellakis's rich, alluring tone."  Canellakis is currently an artist of the Chamber Music Society of Lincoln Center, having been a member of the society's coveted CMS Two program from 2009 to 2012.  He is a frequent guest artist at Bargemusic in New York City, and has performed in some of the country's most prestigious venues including Carnegie Hall, Alice Tully Hall, the Kennedy Center, Jordan Hall, the Kimmel Center, and Disney Hall.

The New York Times declared Michael Brown "a young piano visionary," praising him for "a magnificent performance" and a "powerful technique and a vivid imagination." Brown is First Prize Winner of the 2010 Concert Artists Guild Victor Elmaleh Competition. As winner of the Juilliard Concerto Competition, Brown performed with the Juilliard Orchestra under New York Philharmonic Music Director Alan Gilbert, and he performed a recital at Alice Tully Hall as winner of Juilliard's 2012 William Petschek Piano Recital Award.

The Duo presents innovative programs that combine masterpieces from the standard repertoire with original compositions and arrangements.  For their performance at Brookhaven, the Duo's recital will include Mendelssohn's D major Sonata along with shorter works by Debussy, Janacek, and more.