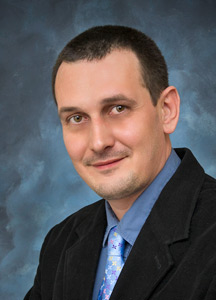 UPTON, NY—The Neutron Scattering Society of America (NSSA) has named Emil Bozin, a condensed matter physicist at the U.S. Department of Energy's Brookhaven National Laboratory, the recipient of their 2014 Science Prize. The NSSA award specifically recognized Bozin's discovery of "broken symmetry local structures in exotic electronic materials, his elaboration of their nature and their importance to the material properties, in particular in PbTe, iridates, manganites, and cuprates."

The prestigious award, which includes a $2500 honorarium, will be presented to Bozin this June at the 2014 American Conference on Neutron Scattering in Knoxville, Tennessee.

"This award from NSSA comes as a surprise and represents a great honor for me," Bozin said. "With this recognition one cannot escape the feeling of being additionally energized, excited and enthusiastic about confronting the scientific challenges ahead. I am grateful for the strong support of my collaborators and group members, and for the opportunity to apply a neutron scattering approach to study nanoscale fluctuations in complex functional materials. It is an empowering feeling to have the freedom to explore fundamental questions and do basic research that may one day have a major impact."

"With this recognition one cannot escape the feeling of being additionally energized, excited and enthusiastic about confronting the scientific challenges ahead."

The NSSA Science Prize honors groundbreaking research conducted over the last five years by scientists who recently received their PhD.  In neutron scattering, scientists bombard materials with focused beams of subatomic neutrons, which bounce off the target to reveal subtle and important structural properties. In research described as "seminal" by the NSSA, Bozin used neutron scattering data and an analysis technique called atomic pair distribution function to identify local structural deviations from the average structure of lead telluride—a material noteworthy for its thermoelectricity, or ability to generate electricity under fluctuating temperatures.

"Discovery of a broken symmetry state in lead telluride was almost accidental," Bozin said. "Nature often surprises us when we least expect it. We're seeing the emergence of these local atomic arrangements as important to the larger material properties."

Bozin's neutron scattering results on local lead off-centering were further confirmed by unusual behavior of phonon-spectra as revealed by inelastic neutron scattering measurements. The discovered effect may be behind the high-performance thermoelectricity in this long-known, well exploited, and seemingly simple material.

The same broken symmetry concept also applied to Bozin's work with copper-based high-temperature superconductors (HTS). Pinning down the mechanism behind the HTS phenomenon, which allows materials to carry electricity with zero loss, remains one of the greatest challenges in condensed matter physics, and local asymmetries may be a key piece of the puzzle. In one recent study, Bozin helped develop a neutron scattering technique that reveals the charge density of fluctuating electrical "stripes" in materials—a major candidate to explain the emergence of superconductivity. The technique itself is widely applicable to other experiments on the nano- and atomic scales that could dramatically advance both basic science and emerging technology.

"Emil combines insightfulness, tenacity and meticulous care in his work, which I think is the key to his ability to make discoveries that others miss," said Simon Billinge, a Brookhaven Lab physicist and professor at Columbia University's School of Engineering and Applied Science.  "His personality is understated, but the impact of his discoveries cannot be overstated.  I believe they will be around for a long time and at the heart of technological as well as scientific breakthroughs. The Science Prize is a great honor, but thoroughly deserved."

Bozin, who joined Brookhaven Lab as an associate scientist in 2010, received his PhD in experimental solid-state physics from Michigan State University (MSU), where he also completed his postdoctoral research in 2008. He then joined Columbia University as an associate research scientist and maintains that collaborative relationship in addition to his role in Brookhaven Lab's X-Ray Scattering Group.

Bozin's work at Brookhaven Lab is supported by the Department of Energy's Office of Science.