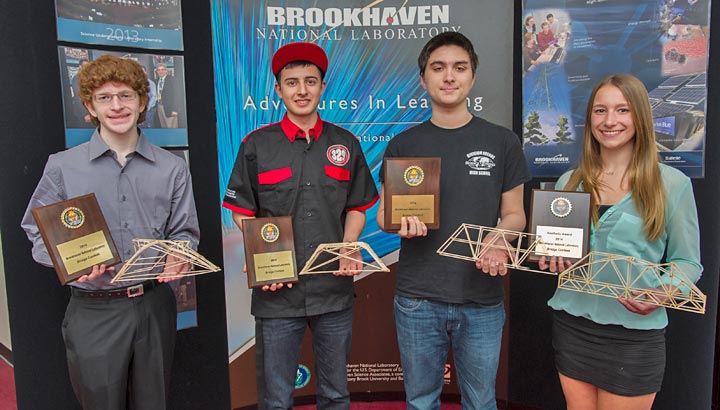 UPTON, NY — Michael W. Skolnick, a student at Ward Melville High School, won the top spot in Brookhaven National Laboratory's 2014 Model Bridge Building Contest. Over 180 high school students from 13 Suffolk County high schools entered the competition, for which they designed and built model bridges with the goal of making the lightest bridge to hold a maximum load of 50 kilograms. Skolnick's bridge weighed 19.10 grams and held 125.8 pounds, 2612.31 times its own weight.

The aesthetic award was given to Karina Hunstein of Smithtown High School East. Hunstein also placed 13th in the efficiency category. 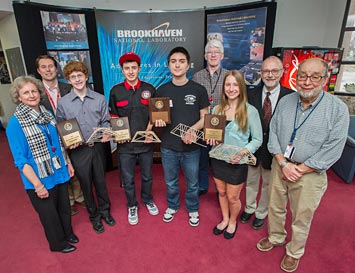 The construction and testing of model bridges promotes the study and application of principles of physics and engineering and helps students develop "hands on" skills. Students get a flavor of what it is to be an engineer, designing structures to a set of specifications and then seeing them perform their function.

At an awards ceremony held at the Lab on March 28, John Carter of the U.S. Department of Energy's Brookhaven Site Office told the students that the real goal of competitions such as these is to spark curiosity and encourage students to think and to learn. "The Department of Energy sponsors these contests to promote work force development and inspire our next generation of leaders," said Carter. "If we can help catapult students to embark on a career in science or engineering, then mission accomplished. I congratulate all of you."