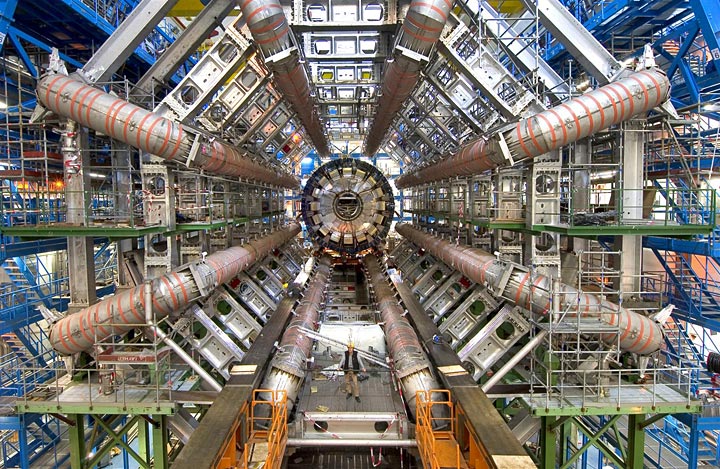 The largest, most powerful particle accelerator in the world — the Large Hadron Collider at CERN — is the setting for the moving story of the enormous scientific discoveries that can happen when thousands of people work together to push forward the frontiers of human innovation.

As science experiments go, the Large Hadron Collider (LHC) breaks nearly every record. It's the largest, most powerful particle accelerator in the world, and the work produced by the atom smasher resulted in the biggest particle physics news of the 21st century – the discovery of the Higgs boson – and a Nobel Prize in 2013.

"Particle Fever," a documentary from physicist-turned-filmmaker Mark Levinson, takes audiences behind the scenes of the experiments at the LHC near Geneva, Switzerland. Thousands of scientists, including over 100 from the U.S. Department of Energy's Brookhaven National Laboratory and nearby Stony Brook University, have spent decades designing, building, and running this 17-mile underground particle racetrack, where protons accelerate to nearly the speed of light and crash together revealing how fundamental particles interact.

"Here's a film where the reason we've worked so hard for several years is celebrated, the reason for our careers and our lives."

Brookhaven Lab is hosting a 2:00 p.m. showing of the film at the Cinema Arts Centre in Huntington, NY, on May 18, 2014. A post-screening wine and cheese reception and panel discussion will be attended by scientists who work on the ATLAS experiment at the LHC, including: Howard Gordon and Ketevi Adikle Assamagan, experimental particle physicists at Brookhaven Lab; John Hobbs, a physics professor at Stony Brook University and a senior physicist at Brookhaven; and Denis Damazio, a Brookhaven/ATLAS physicist who will join via video chat from the European Center for Nuclear Research (CERN), where the LHC is located.

"Here's a film where the reason we've worked so hard for several years is celebrated, the reason for our careers and our lives," says Gordon. "The movie gets across the excitement of the physics and how we feel about our work.  And it's easy for everyone to understand. I've heard from both scientists and non-scientists who've seen it, and everybody has loved it."

The film has been hailed as a "mind blower" by the New York Times. The Los Angeles Times called it a "surprisingly emotional film."

Gordon agrees. "I got chills watching it, and tears in my eyes several times during the movie."

Beginning in 2008, before the LHC switched on for the first time, David Kaplan, a theoretical physicist at Johns Hopkins University, came up with the idea for the documentary and set out to recruit excellent filmmakers to capture the search for the origins of matter in the universe. The story of the years that uncovered the Higgs boson is told compellingly by veteran editor Walter Murch, a two-time Academy Award winner for Apocalypse Now and The English Patient.

And it's not just for physicists. "The movie gives students, in particular, exposure to what it's really like in the world of science right now," Gordon says. "And for the public at large that supports us, we owe a great debt of gratitude, so it's great to be able to explain to them what we do."

The movie is showing in limited theaters and previous screenings have sold out quickly. For advance tickets, visit the Cinema Arts Centre.