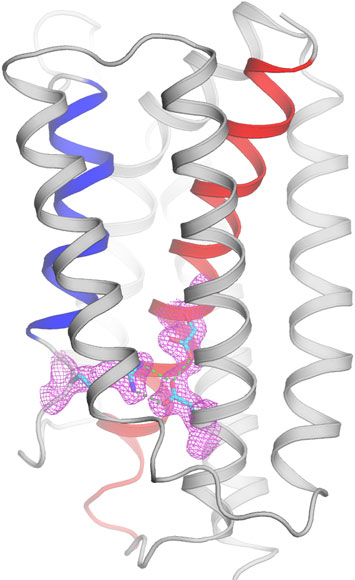 A calcium-leak channel prevents calcium overload in cellular organelles for protection of life. Viewing from within the membrane, the structure is shown as ribbons for the closed-conformation. The di-aspartyl pH-sensor unit and the arginine/aspartate lock are shown as sticks covered by electron densities in magenta.

UPTON, NY—Sometimes a cell has to die—when it's done with its job or inflicted with injury that could otherwise harm an organism. Conversely, cells that refuse to die when expected can lead to cancer. So scientists interested in fighting cancer have been keenly interested in learning the details of "programmed cell death." They want to understand what happens when this process goes awry and identify new targets for anticancer drugs.

The details of one such target have just been identified by a group of scientists from the U.S. Department of Energy's Brookhaven National Laboratory, Columbia University, New York University, Baylor College of Medicine, Technical University of Munich, and the New York Structural Biology Center. The group, known as the New York Consortium on Membrane Protein Structure (NYCOMPS), used x-rays at Brookhaven Lab's National Synchrotron Light Source (NSLS) to decipher the atomic level structure of a protein that regulates the level of calcium in cells. The work is described as a research article published in Science June 6, 2014.

"The accumulation of calcium is a key signaling agent that can trigger programmed cell death, or apoptosis," explained Wayne Hendrickson of Columbia and Brookhaven, and the director of NYCOMPS as well as a senior author on the paper. "Our study reveals how this protein, embedded in a cellular membrane structure called the endoplasmic reticulum, serves as a molecular safety valve for keeping calcium levels steady. Designing drugs that inhibit this protein would promote cell death, which could be a promising strategy for fighting cancers in which such proteins are overexpressed."

The protein that the scientists studied is a prokaryotic homolog of human "Transmembrane Bax Inhibitor Motif" (TMBIM) proteins, which come in six varieties. TMBIM6 is overexpressed in various cancers—including prostate, breast, glioma, uterine, ovarian, and lung.

"Our work using the prokaryotic version of this protein has enabled us to construct a three-dimensional model that can be used as a basis for the rational design of possible inhibitor molecules," said Qun Liu, a scientist at NSLS and NYCOMPS and the lead author on the paper.

The atomic-level structures were determined using x-ray crystallography at NSLS beamlines X4A and X4C. Interactions of x-rays with the 3-D lattices of the protein molecules produce diffraction patterns from which the 3-D molecular images were derived.  The images reveal a novel structure consisting of a centralized helix wrapped by two novel triple-helix sandwiches that traverse the membrane. The central portion can take on an open or closed conformation dependent on the acidity level, or pH. At physiological pH, open and closed conformations exist in equilibrium, maintaining a steady of state of calcium in the cell by allowing gradual leakage of calcium across the membrane through a transient transmembrane pore.

"This leak is intrinsic to all kinds of cells and is cytoprotective for life, similar to a pressure safety value used in a standard steam boiler for safety assurance," said Liu.

The studies reveal in detail how the TMBIM protein senses and responds to changes in acidity to precisely regulate the mechanism.

"The next step will be to solve crystal structures of the human TMBIM proteins to refine the design of possible inhibitor drugs," said Liu.

That work will take place at a new light source nearing completion at Brookhaven known as NSLS-II. That facility, set to start early experiments later this year, will be 10,000 times brighter than NSLS, making it particularly suitable for studies of membrane proteins, which are difficult to crystallize.

The New York Structural Biology Center is working in partnership with Photon Sciences at Brookhaven to build a microdiffraction beamline, called NYX, for advanced studies of biological molecules at NSLS-II.

This research was supported in part by the National Institutes of Health (NIH) grant GM095315 and GM107462. The NSLS at Brookhaven Lab is a DOE Office of Science user facility, with beamlines X4A and X4C supported by the New York Structural Biology Center.