UPTON, NY — The U.S. Department of Energy's (DOE) Brookhaven National Laboratory has won an R&D 100 Award for a novel radiation detector, GammaScout. The compact system provides detailed spectroscopic and imaging information about the presence and distribution of x-ray and gamma-ray radiation in a sample or area.

R&D Magazine gives R&D 100 Awards annually to the top 100 technological achievements of the year. Typically, these are innovations that transform basic science into useful products. The awards will be presented on November 7, 2014, in Las Vegas, Nevada. 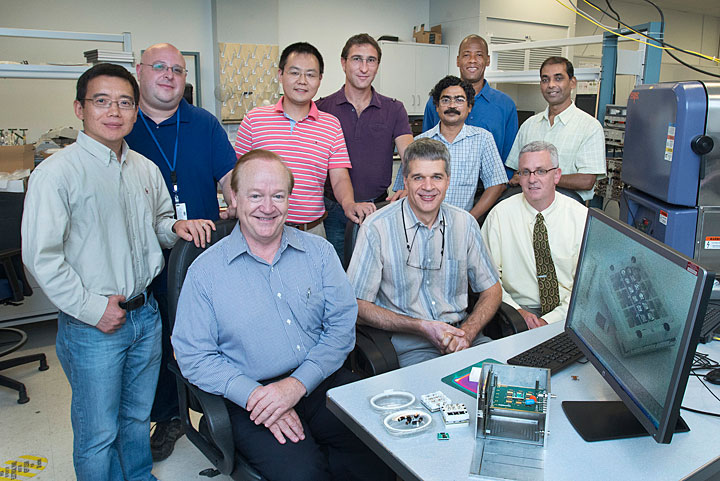 Brookhaven is one of 10 DOE laboratories, plus DOE's Advanced Research Projects Agency – Energy, that have won a total of 32 R&D 100 Awards this year.

"These awards recognize the tremendous value of our National Labs, " said Secretary of Energy Ernest Moniz. "Research and development at the National Labs continues to help our nation address its energy challenges and pursue the scientific and technological innovations necessary to remain globally competitive."

Brookhaven's award is for the development of a compact, high position-resolution cadmium-zinc-telluride (CZT) radiation detector that is coupled with novel low-noise pulse processing electronics and high-performance image acquisition software. All are packaged into a compact, handheld unit that provides spectroscopic- and imaging-information for gamma-ray-emitting radioisotopes, and identifies the elemental composition of materials based on their x-ray fluorescence. Potential applications include tracking the movement of radioactive materials and imaging radiopharmaceuticals in oncology and cardiology settings.

The principal advantage of CZT detectors is that they offer high-resolution spectroscopic data at room temperature.  Previously, instruments for detecting and imaging gamma-rays and hard x-rays were largely confined to laboratory environments because they use germanium detectors that must be cryogenically cooled for operation.

Aleksey Bolotnikov and Ralph James of the Lab's Radiation Detector and Nonproliferation R&D Group led the project team that developed the GammaScout technology. 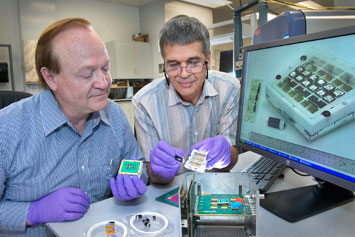 "The members of the team are thrilled and humbled by this recognition as winner of a R&D 100 award," said Bolotnikov.  "Our approach to correct materials problems affecting the quality of semiconductor radiation detectors has rendered excellent results."

James added, "It has been exciting to be part of an effort that challenged the state-of-the-art for radiation-detector designs and overcame performance-limiting problems that most people in the detector R&D community had taken for granted as unavoidable. We are deeply grateful to our sponsor in the National Nuclear Security Administration's Office of Defense Nuclear Nonproliferation Research and Development.  We appreciate their belief in our ideas and the sustained support needed to bring this concept to fruition."

Korea University, who performed their work as visiting scientists at Brookhaven.

The novel CZT detector combines the high-resolution capability of cryogenically cooled semiconductors with the ambient-temperature operation capability of scintillators, materials that light up when they detect radiation. By combining the best aspects of each of these two classes of detectors while minimizing their weaknesses, GammaScout delivers high performance in a small package.

This position-sensitive detector can be fabricated at a much lower cost than other solid-state detectors as its design allows for more efficient correction of defects in the CZT crystals, offering significant performance improvements. This enhancement enables more rapid measurements, improved images, and easier interpretations of the presence of radioactive isotopes and their distributions at a lower production cost.

CZT semiconductor detectors have a wide variety of other possible applications, and several engineered systems are under development. Additional applications include spectrometers and imagers for real-time dosimeters, x-ray radiography, oil and mineral exploration, and x-ray fluorescence instruments for materials sorting. The fundamental key component of each of the instruments is the detector.

"CZT detectors can provide an indicator of radiological hazards for emergency response workers like firemen and policemen," said James. "The size of an entire battery-operated, low-cost system is no larger than a beeper, but can warn untrained personnel about the source of radiation, dangerous levels, and doses.  Federal workers like customs agents, border patrols and transportation security officers could also use it to assist with interdiction of a wide range of radioactive materials."

Additional field applications include measuring lead in paints, identifying toxic elements in the environment, and enhancing recycling of metals.

One of ten national laboratories overseen and primarily funded by the Office of Science of the U.S. Department of Energy (DOE), Brookhaven National Laboratory conducts research in the physical, biomedical, and environmental sciences, as well as in energy technologies and national security. Brookhaven Lab also builds and operates major scientific facilities available to university, industry and government researchers. Brookhaven is operated and managed for DOE's Office of Science by Brookhaven Science Associates, a limited-liability company founded by the Research Foundation for the State University of New York on behalf of Stony Brook University, the largest academic user of Laboratory facilities, and Battelle, a nonprofit, applied science and technology organization.