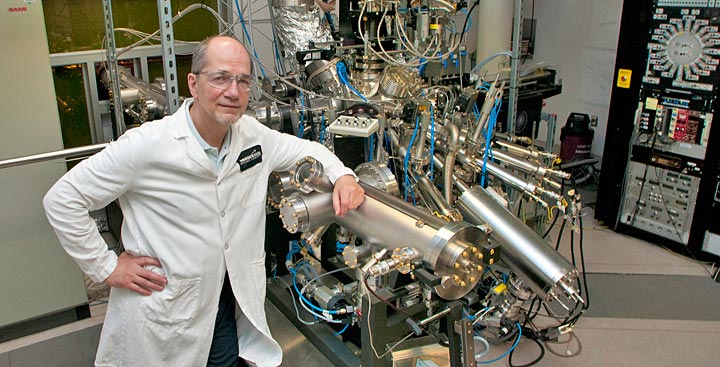 Ivan Bozovic, a physicist at the U.S. Department of Energy's Brookhaven National Laboratory, has been elected to Academia Europea, the European Academy of Humanities, Letters and Sciences, in recognition of his lifetime achievements. Best known for his pioneering work developing tools to assemble exquisite thin-film samples of cuprate superconductors, Bozovic has also made important experimental discoveries and advances in the theoretical underpinnings of these and other complex materials that hold great promise for energy-saving applications.

"The pursuit of scientific knowledge is global, as are the energy challenges we are trying to address by exploring the fundamental properties of these complex materials."

Bozovic joins a roster of some 2,800 Academia Europea members drawn from across the European continent, including European scholars who are resident in other regions of the world. Among the members are fifty-two Nobel Laureates, several of whom were elected to the Academia before they received that prestigious prize. Invitations are made only after nomination by existing members followed by an extensive peer review to scrutinize and confirm each individual's scholarship and eminence in their chosen field. As a rule, a nominee should already be a member of the National Academy of Science of one of the European countries.

"It is an honor to be recognized among the pioneers and leaders of science in Europe for my research career, which began in Europe and continues in collaboration with scientists at European institutions, and proceeds with very strong support from the U.S. federal government and the DOE national laboratory system," said Bozovic, who is also an adjunct professor at Yale University. "The pursuit of scientific knowledge is global, as are the energy challenges we are trying to address by exploring the fundamental properties of these complex materials."

To help unravel the mysteries of cuprate superconductors—materials able to carry electric current with no resistance when cooled to a particular temperature—Bozovic developed a unique molecular beam epitaxy (MBE) system to assemble thin films of these materials one atomic layer at a time. Using this invention, which has garnered two R&D awards, he has made a series of discoveries related to interface superconductivity, bringing it to the forefront of research in Condensed Matter Physics.

For example, he showed that superfluid can be confined to a single atomic layer at the interface of two materials, neither of which is superconducting. He also proved that electron pairs exist on both sides of the superconductor-to-insulator transition, offering hope that the operating temperature of superconductors could be raised for more practical applications.

Bozovic was also the first to achieve delta doping in oxides, fabricated the first lateral superlattices and oxide nanowires, and has made significant contributions to optics and spectroscopy.

He is one of few physicists prominent not just in experimental research but also in theory, having published early in his career significant theoretical papers on symmetry, electron and vibration spectra, instabilities, and photo-response of polymers, quasi-one-dimensional metals and nanotubes.

Bozovic earned a Ph.D. in physics from the University of Belgrade in Yugoslavia in 1975, and served as a professor and the Head of the Physics Department until 1985. From 1986 until 1988, he worked at the Applied Physics Department at Stanford University. He was a senior research scientist at Varian Research Center in Palo Alto, California, 1989 to 1998, and the chief technical officer and principal scientist for Oxxel GmbH in Germany 1998 to 2002. He joined Brookhaven as a senior scientist and the leader of the Molecular Beam Epitaxy group in 2003. In 2012 he was a co-recipient of the Bernd T. Matthias Prize for Superconducting Materials, and in 2013 was chosen to give the Max Planck Lecture at MPI-Stuttgart, Germany. His research results have been published in more than 200 highly cited research papers, many in the highest-impact journals such as Nature, Science, and Nature Materials. Bozovic is a Fellow of the American Physical Society and of SPIE, the International Society for Optics and Photonics, and a Foreign Member of Serbian Academy of Science and Arts.

Bozovic's research at Brookhaven is supported by the DOE Office of Science.