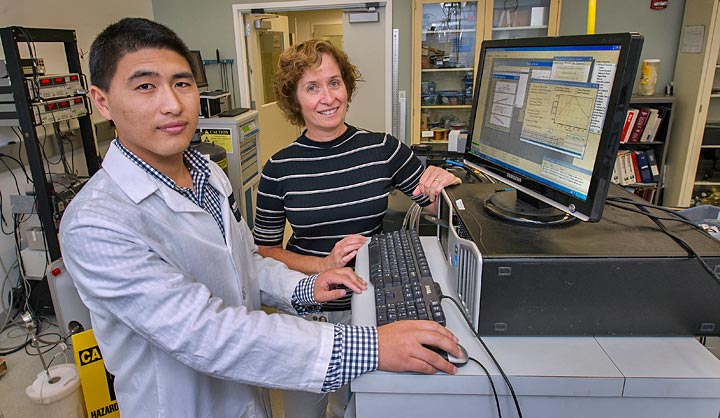 Scientists from the U.S. Department of Energy's Brookhaven National Laboratory and Stony Brook University have explored this frigid landscape of absolute zero to isolate and probe these quantum phase transitions with unprecedented precision.

"In order to deduce the full quantum mechanical nature, we needed to reach temperatures as low as 0.06 Kelvin—much, much colder than liquid helium or even interstellar space."

"Under these cold conditions, the electronic, magnetic, and thermodynamic performance of metallic materials is defined by these elusive quantum fluctuations," said study coauthor Meigan Aronson, a physicist at Brookhaven Lab and professor at Stony Brook. "For the first time, we have a picture of one of the most fundamental electron states without ambient heat obscuring or complicating those properties."

The scientists explored the onset of ferromagnetism—the same magnetic polarization exploited in advanced electronic devices, electrical motors, and even refrigerator magnets—in a custom-synthesized iron compound as it approached absolute zero.

The research provides new methods to identify and understand novel materials with powerful and unexpected properties, including superconductivity—the ability to conduct electricity with perfect efficiency. The study will be published online Sept. 15, 2014, in the journal Proceedings of the National Academy of Sciences.

"Exposing this quantum phase transition allows us to predict and potentially boost the performance of new materials in practical ways that were previously only theoretical," said study coauthor and Brookhaven Lab physicist Alexei Tsvelik. 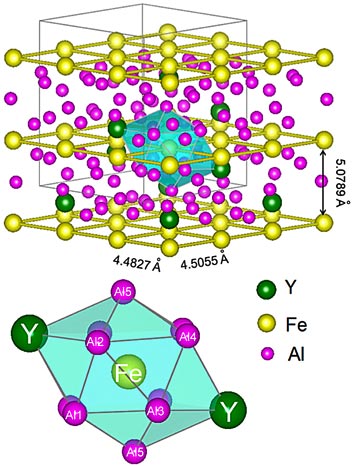 Rendering of the near–perfect crystal structure of the yttrium–iron–aluminum compound used in the study. The two–dimensional layers of the material allowed the scientists to isolate the magnetic ordering that emerged near absolute zero.

The presence of heat complicates or overpowers the so-called quantum critical fluctuations, so the scientists conducted experiments at the lowest possible temperatures.

"The laws of thermodynamics make absolute zero unreachable, but the quantum phase transitions can actually be observed at nonzero temperatures," Aronson said. "Even so, in order to deduce the full quantum mechanical nature, we needed to reach temperatures as low as 0.06 Kelvin—much, much colder than liquid helium or even interstellar space."

The researchers used a novel compound of yttrium, iron, and aluminum (YFe2Al10), which they discovered while searching for new superconductors. This layered, metallic material sits poised on the threshold of ferromagnetic order, a key and very rare property.

"Our thermodynamic and magnetic measurements proved that YFe2Al10 becomes ferromagnetic exactly at absolute zero—a sharp contrast to iron, which is ferromagnetic well above room temperature," Aronson said. "Further, we used magnetic fields to reverse this ferromagnetic order, proving that quantum fluctuations were responsible."

The collaboration produced near-perfect samples to prove that material defects could not impact the results. They were also the first group to prepare YFe2Al10 in single-crystal form, which allowed them to show that the emergent magnetism resided within two-dimensional layers.

"As the ferromagnetism decayed with heat or applied magnetic fields, we used theory to identify the spatial and temporal fluctuations that drove the transition," Tsvelik said. "That fundamental information provides insight into countless other materials."

The scientists plan to modify the composition of YFe2Al10 so that it becomes ferromagnetic at nonzero temperatures, opening another window onto the relationship between temperature, quantum transitions, and material performance.

"Robust magnetic ordering generally blocks superconductivity, but suppressing this state might achieve the exact balance of quantum fluctuations needed to realize unconventional superconductivity," Tsvelik said. "It is a matter of great experimental and theoretical interest to isolate these competing quantum interactions that favor magnetism in one case and superconductivity on the other."

Added Aronson, "Having more examples displaying this zero-temperature interplay of superconductivity and magnetism is crucial as we develop a holistic understanding of how these phenomena are related and how we might ultimately control these properties in new generations of materials."

Other authors on this study include Liusuo Wu, Moosung Kim, and Keeseong Park, all of Stony Brook University's Department of Physics and Astronomy.

The research was conducted at Brookhaven Lab's Condensed Matter Physics and Materials Science Department and supported by the U.S. Department of Energy's Office of Science (BES).