New Clues About a Brain Protein with High Affinity for Valium

UPTON, NY—Valium, one of the best known antianxiety drugs, produces its calming effects by binding with a particular protein in the brain. But the drug has an almost equally strong affinity for a completely different protein. Understanding this secondary interaction might offer clues about Valium's side effects and point the way to more effective drugs.

Now, a team of scientists from Columbia University, the New York Structural Biology Center (NYSBC), and the U.S. Department of Energy's (DOE) Brookhaven National Laboratory has deciphered structural details of this secondary protein, known as TSPO. Using high-intensity x-rays at the National Synchrotron Light Source (NSLS), a DOE Office of Science User Facility at Brookhaven Lab, they produced high-resolution atomic-level snapshots of the difficult-to-study protein both alone and in conjunction with a Valium-like compound. The results are published in the January 30, 2015, issue of Science. 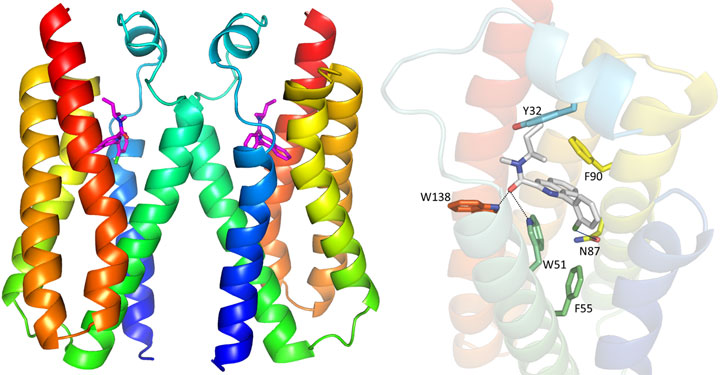 Left: Structure of TSPO (colorful "ribbon") bound to a Valium-like compound (pink "stick" molecule). Right: A closeup of the atomic scale interactions between the drug-like molecule and TSPO. Understanding these detailed interactions may help scientists design new drugs that bind more specifically, either avoiding TSPO entirely or targeting it exclusively.

"These structural details could point to ways to design more specifically targeted drugs," said Wayne Hendrickson, the scientist who led the project, who holds a joint appointment with Columbia and Brookhaven Lab.

"These structural details could point to ways to design more specifically targeted drugs."

But even more interesting, Hendrickson said, was a series of biochemical assays the team performed to try to decipher the physiological function of TSPO. These studies revealed that TSPO breaks down a compound found in red blood cells to produce a novel product (which the scientists named bilindigin) that is similar to a chemical important for scavenging reactive forms of oxygen.

"These 'reactive oxygen species' contribute to a variety of disease processes—including inflammation and programed cell death, which play roles in cardiovascular disease and cancer," said Youzhong Guo, a postdoctoral research fellow working with Hendrickson at Columbia and the first author on the paper. "Our findings therefore suggest that TSPO may help regulate the levels of potentially damaging oxygen compounds in cells."

While the team does not yet fully understand the physiological role of TSPO, or whether it is related to side effects of Valium and other benzodiazepine drugs, studies to explore these questions could potentially offer insight, and possibly help identify new targets for drugs designed to mitigate these effects. 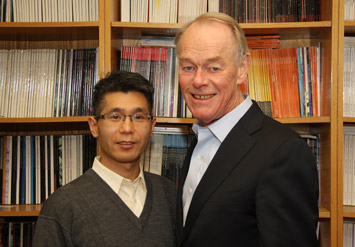 The structural studies were performed at NSLS beamlines X4A and X4C with the help of NYSBC beamline scientist Qun Liu and technicians John Schwanof and Randy Abramowitz. NSLS operated at Brookhaven Lab from 1982 through September of 2014. Brookhaven Lab is now commissioning a much more advanced synchrotron, NSLS-II, which will produce x-ray beams 10,000 times brighter than those at NSLS.  This world-leading brightness will allow researchers to study ever more challenging biomolecules, including difficult-to-crystallize membrane proteins such as the TSPO proteins analyzed in this study. NYSBC, in partnership with Brookhaven Lab, is now constructing beamline NYX at NSLS-II to provide ready access to investigators from major New York institutions.

This work was supported in part by NIH grants GM095315 and GM107462 to W.A.H. NSLS beamlines X4A and X4C were supported by NYSBC at the NSLS, which received operational funding from the DOE Office of Science.