The following news release was issued by Macquarie University in Australia. It describes a project incorporating data collected in ecosystems around the world, including data from the Arctic tundra acquired by Alistair Rogers, a biologist at the U.S. Department of Energy's Brookhaven National Laboratory as part of DOE's Next-Generation Ecosystem Experiments (NGEE Arctic) project. For more information about Rogers' work, see the accompanying sidebar and links. Media inquiries about the overall study should be directed to Amy MacIntyre at Macquarie University: +61 (2) 9850 4051, amy.macintyre@mq.edu.au. 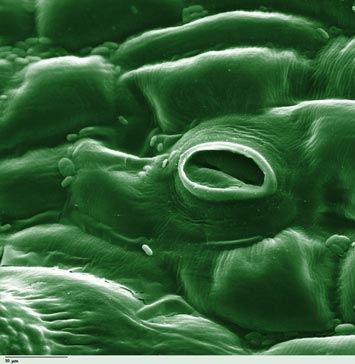 Stoma in a tomato leaf shown via colorized scanning electron microscope image. These tiny pore-like structures help regulate the flow of carbon dioxide and water between leaves and the environment. Credit: Photohound

Plants trade water for carbon - every litre of water that they extract from the soil allows them to take up a few more grams of carbon from the atmosphere to use in growth. A new global study, led by Australian researchers and published this week in Nature Climate Change, shows that plants trade their water wisely, with different plant species having different trading strategies depending on how much it costs them to obtain their water.

"Our study looks at how much extra water it would take for a plant to gain one more gram of carbon," says Dr Yan-Shih Lin of Macquarie University, lead author of the study.

"We predicted that individual plants should keep this exchange rate constant, but that the exchange rate should differ depending on what type of plant it is and where it grows."

Comparing data from the different ecosystems showed that most of the researchers' predictions were supported, indicating that plants have adapted their water-use strategies to their environments. The biggest surprise was that evergreen savanna trees were among the most spendthrift plants with water, despite living in hot and arid environments.

"We crowd-sourced the data we needed to test these predictions," says Professor Belinda Medlyn, of the University of Western Sydney.

"We couldn't travel the whole world ourselves, so we contacted other researchers around the globe and together we put together data from all kinds of ecosystems, from Arctic tundra to the Amazon rainforest to the backblocks of Australia."

"This work is important because it provides insights into how plants have adapted to their environments" says Dr Lin.

"Vegetation plays a really major role in the Earth system, by storing carbon, moving water around the landscape and cooling the planet's surface. These results provide us with crucial new information needed to predict these effects, especially under different climate-change scenarios." 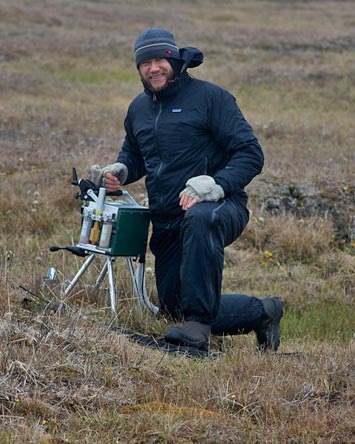 Alistair Rogers, a Brookhaven Lab biologist with expertise in plant physiology, has been collecting data in Barrow, Alaska, as part of the U.S. Department of Energy's Next-Generation Ecosystem Experiments NGEE-Arctic project. His work is focused on improving how Arctic plant physiology is represented in Earth system models.

Some of this data has now been incorporated into an international effort to improve how the behavior of plant structures that regulate the flow of carbon dioxide (CO2) and water between leaves and the environment are represented in these models. That project, led by Yan-Shih Lin of Australia's Macquarie University and Belinda Medlyn of the University of Western Sydney and published in Nature Climate Change, aimed to build a new global dataset describing how these pore-like structures, called stomata, function in different plant/climate environments, or biomes.

"Stomatal control of the transfer of CO2 into the leaf is an important process controlling CO2 uptake," said Rogers, "but current Earth system models represent this process in a way that treats most vegetation identically. A global dataset incorporating measurements from multiple biomes around the world will improve our understanding of the role stomata play in the global carbon cycle."

"I was excited to have the opportunity to share the only Arctic data in this synthesis."

Rogers was one of many scientists from around the world participating in this ambitious project.

"Data on Arctic species are particularly rare, so I was excited to have the opportunity to share data from the NGEE-Arctic project—the only Arctic data in this synthesis," Rogers said.

NGEE-Arctic is led by DOE's Oak Ridge National Laboratory and is supported by the DOE Office of Science (BER).