The following news release about the restart of the Large Hadron Collider (LHC) is being issued by the U.S. Department of Energy's Brookhaven National Laboratory on behalf of the U.S. LHC organization: http://uslhc.web.cern.ch/. In addition to serving as the U.S. host laboratory for the ATLAS experiment at the LHC, Brookhaven National Laboratory plays multiple roles in this international collaboration, from construction and project management to data storage, distribution, and analysis. For more information about Brookhaven's role in research at ATLAS, see: http://www.bnl.gov/atlas/. To interview Brookhaven Lab scientists about the start of the new physics run at ATLAS, please contact Karen McNulty Walsh, kmcnulty@bnl.gov, 631-344-8350.

U.S. Scientists Celebrate the Restart of the Large Hadron Collider 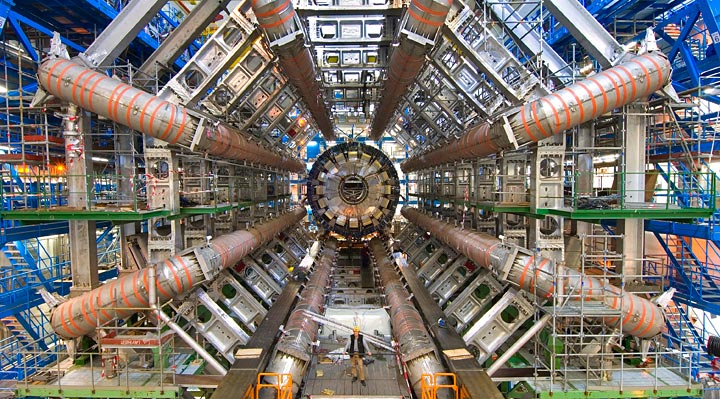 The ATLAS experiment at the Large Hadron Collider. In addition to serving as the U.S. host laboratory for the ATLAS experiment, Brookhaven National Laboratory plays multiple roles in this international collaboration, from construction and project management to data storage, distribution, and analysis.

Earlier today, the world's most powerful particle accelerator began its second act. After two years of upgrades and repairs, proton beams once again circulated around the Large Hadron Collider, located at the CERN laboratory near Geneva, Switzerland.

With the collider back in action, the more than 1,700 U.S. scientists who work on LHC experiments are prepared to join thousands of their international colleagues to study the highest-energy particle collisions ever achieved in the laboratory.

"With the LHC operational again, at even higher energies, the possibilities for new discoveries are endless."

These collisions – hundreds of millions of them every second – will lead scientists to new and unexplored realms of physics, and could yield extraordinary insights into the nature of the physical universe.

"The Higgs discovery was one of the most important scientific achievements of our time," said James Siegrist, the U.S. Department of Energy's Associate Director of Science for High Energy Physics. "With the LHC operational again, at even higher energies, the possibilities for new discoveries are endless, and the United States will be at the forefront of those discoveries."

During the LHC's second run, particles will collide at a staggering 13 teraelectronvolts (TeV), which is 60 percent higher than any accelerator has achieved before. The LHC's four major particle detectors – ATLAS, CMS, ALICE and LHCb – will collect and analyze data from these collisions, allowing them to probe new areas of research that were previously unattainable.

At 17 miles around, the Large Hadron Collider is one of the largest machines ever built. The United States played a vital role in the construction of the LHC and the huge and intricate detectors for its experiments. Seven U.S. Department of Energy national laboratories joined roughly 90 U.S. universities to build key components of the accelerator, detectors and computing infrastructure, with funding from the DOE Office of Science and the National Science Foundation.

The U.S. contingent was part of an estimated 10,000 people from 113 different countries who helped to design, build, and upgrade the LHC accelerator and its four particle detectors.

"We are on the threshold of an exciting time in particle physics: the LHC will turn on with the highest energy beam ever achieved," said Fleming Crim, National Science Foundation Assistant Director for Mathematical and Physical Sciences. "This energy regime will open the door to new discoveries about our universe that were impossible as recently as two years ago."

In addition to the scientists pushing toward new discoveries on the four main experiments, the U.S. provides a significant portion of the computing and data analysis – roughly 23 percent for ATLAS and 33 percent for CMS. U.S. scientists on the ALICE experiment developed control and tracking systems for the detector and made significant contributions in software, hardware and computing support. US scientists also helped improve trigger software for data analysis for the LHCb experiment.

U.S. institutions will continue to make important contributions to the LHC and its experiments, even beyond the second run, which is scheduled to continue through themiddle of 2018. Universities and national laboratories are developing new accelerator and detector technology for future upgrades of the LHC and its experiments. This ongoing work encourages a strong partnership between science and industry, and drives technological innovation in the United States.

"Operating accelerators for the benefit of the physics community is what CERN's here for," said CERN Director General Rolf Heuer. "Today, CERN's heart beats once more to the rhythm of the LHC."

For more information on the U.S. role in the Large Hadron Collider, visit this website: http://uslhc.web.cern.ch. For a series of videos on the LHC featuring U.S. scientists, visit this YouTube playlist.

CERN, the European Organization for Nuclear Research, is the world's leading laboratory for particle physics. It has its headquarters in Geneva. At present, its Member States are Austria, Belgium, Bulgaria, the Czech Republic, Denmark, Finland, France, Germany, Greece, Hungary, Israel, Italy, the Netherlands, Norway, Poland, Portugal, Slovakia, Spain, Sweden, Switzerland and the United Kingdom. Romania is a Candidate for Accession. Serbia is an Associate Member in the pre-stage to Membership. India, Japan, the Russian Federation, the United States of America, Turkey, the European Union, JINR and UNESCO have Observer Status.

The National Science Foundation (NSF) is an independent federal agency that supports fundamental research and education across all fields of science and engineering. In fiscal year (FY) 2015, its budget is $7.3 billion. NSF funds reach all 50 states through grants to nearly 2,000 colleges, universities and other institutions. Each year, NSF receives about 48,000 competitive proposals for funding, and makes about 11,000 new funding awards. NSF also awards about $626 million in professional and service contracts yearly.