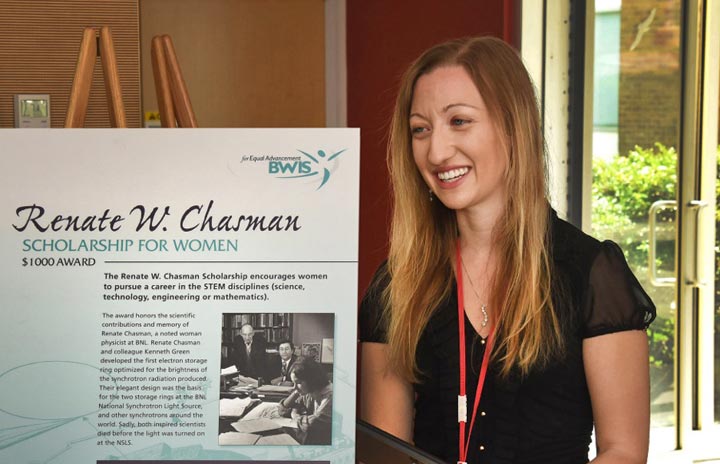 The scholarship is named after the late Renate W. Chasman, a noted physicist who worked at Brookhaven National Laboratory. Chasman's legacy includes contributions to the development of particle accelerators. BWIS has awarded the scholarship honoring Chasman annually since 1987. Under current guidelines, the $1000 scholarship is offered to a woman who is pursuing a career in natural sciences, engineering, or mathematics. The scholarship has been awarded to 31 women since its inception.

"Each year we receive applications from exceptional women," said Anna Goldberg, a 2012 Chasman recipient and the current chair of the BWIS Renate W. Chasman Scholarship Board. "Choosing just one winner is a challenge for the selection committee, but it brings us great pleasure to present the 2015 Chasman Scholarship to Kristine."

Horvat says she remembers the defining moment when she decided she wanted to be a scientist. "When I was ten years old I witnessed a lightning strike just ten feet away from where I was standing inside my house," she said. "From then on I was hooked on science."

Horvat adds that she visited Brookhaven Lab's Science Learning Center at the age of 12 and realized the Lab was the perfect environment to study science and research new ideas. "I held on to that idea and worked hard and came back to the Lab through the Science Undergraduate Laboratory Internship (SULI) program," said Horvat. "The experience was so positive that I came back to the Lab for two additional summers as an undergraduate researcher and decided to continue my studies at SBU to pursue my Ph.D. in materials science and engineering."

In addition to her research schedule, Horvat is involved with the Women in Science and Engineering program at SBU helping to coordinate seminars while sharing her Brookhaven and SBU experiences with future women scientists and engineers. She also gave a chemical engineering thermodynamics class to sophomores.

"My experiences at Brookhaven and Stony Brook have led me to a scientific future that I know I will enjoy — a career path that will focus on alternative energy research, as well as educating our future generation of scientists," said Horvat. "I am grateful to BWIS for selecting me as this year's Chasman Scholarship awardee. The award will help me reach my career goals."

Note to local editors: Kristine Horvat is a resident of Calverton.