The following news release on Early Career Research Program Funding was issued by the U.S. Department of Energy. One of the recipients is Jing Tao, a physicist at DOE's Brookhaven National Laboratory. For more on Tao's research, see section below, or contact Justin Eure, (631) 344-2347, jeure@bnl.gov. DOE News Media Contact: news@science.doe.gov.

Jing Tao, a physicist at Brookhaven Lab, will use the funding to explore elusive quantum phenomena with major potential applications 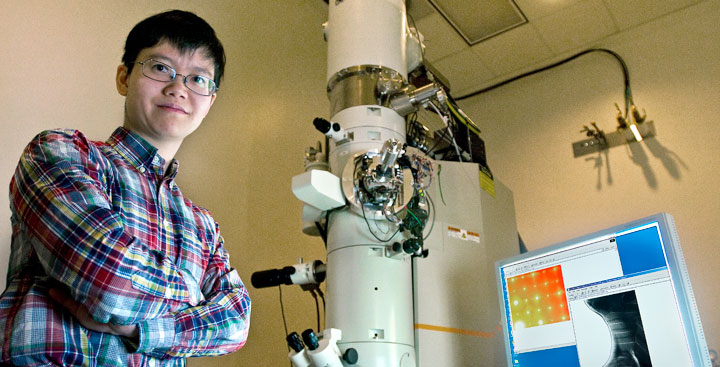 Physicist Jing Tao with one of Brookhaven's transmission electron microscopes.

WASHINGTON, DC—The Department of Energy's (DOE's) Office of Science has selected 44 scientists from across the nation – including 17 from DOE's national laboratories and 27 from U.S. universities – to receive significant funding for research as part of DOE's Early Career Research Program. The effort, now in its sixth year, is designed to bolster the nation's scientific workforce by providing support to exceptional researchers during the crucial early career years, when many scientists do their most formative work.

"Supporting talented researchers in their early career years is one key to building and maintaining an effective scientific workforce for the nation," said Patricia M. Dehmer, Acting Director of DOE's Office of Science.  "We congratulate the winners of this year's competition and look forward to following their achievements over the next five years."

Under the program, university-based researchers will receive at least $150,000 per year to cover summer salary and research expenses. For researchers based at DOE national laboratories, where DOE typically covers full salary and expenses of laboratory employees, grants will be at least $500,000 per year to cover year-round salary plus research expenses. The research grants are planned for five years.

To be eligible for the DOE award, a researcher must be an untenured, tenure-track assistant or associate professor at a U.S. academic institution or a full-time employee at a DOE national laboratory, who received a Ph.D. within the past 10 years. Research topics are required to fall within one of the Department's Office of Science's six major program offices:

A list of the 44 awardees, their institutions, and titles of research projects is appended and is also available on the Early Career Research Program webpage at http://science.energy.gov/early-career/.

Tao and her colleagues explore the intimate interactions of a particle or system's quantum characteristics, including charge, spin, and orbital and lattice degrees of freedom. These subtle phenomena can be exploited to develop exciting, cutting-edge technologies, including spintronics, high-temperature superconductors, and quantum computers. Existing experimental methods rely on examining materials at equilibrium—often before or after the useful behavior emerges or subsides—but Tao's project will examine this quantum world with unprecedented speed and sensitivity.

Tao will use Brookhaven Lab's ultrafast electron diffraction (UED) instrument to excite custom-designed, complex materials and then probe them with an intense beam of electrons. Instrumentation upgrades will be made during the course of the experiment to help distinguish different kinds of elusive subatomic ordering that may underlie promising phenomena. Mapping non-equilibrium electronic states will reveal new fundamental rules of physics and help scientists design new, high-performing materials and technologies.

"I am truly honored and humbled to received this award," Tao said. "With this award, my colleagues and I will have the chance to enhance the performance of the UED technique developed at Brookhaven. This unique technique will enable us to explore some fundamental and challenging problems in condensed matter physics, such as disentangling the complex interplay of competing degrees of freedom."