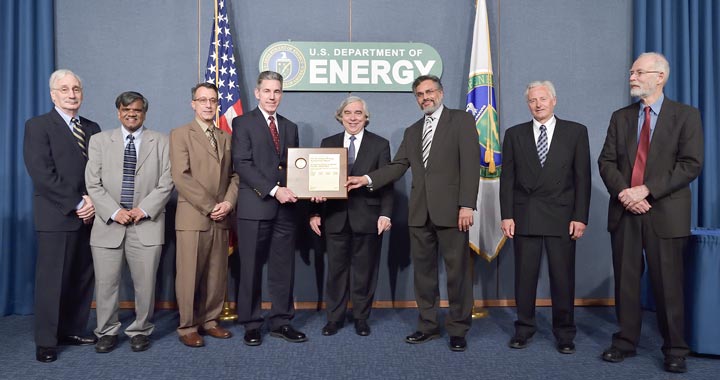 UPTON, NY — Following the much-anticipated recent restart of the Large Hadron Collider (LHC) at CERN, the European Organization for Nuclear Research, a 17-member team primarily based at the U.S. Department of Energy's (DOE) Brookhaven National Laboratory was recognized with one of DOE's most prestigious awards for successfully completing two superconducting magnets for the 17-mile-circumference collider.

Energy Secretary Ernest Moniz presented the Secretary's Honor Award for Achievement to the Brookhaven Lab team during a May 7 ceremony at DOE headquarters in Washington D.C. These annual awards are given to recognize individual and team excellence and achievement. The team was chosen for successfully constructing, testing, and delivering the magnets to enhance the reliability of operations at the LHC.

The team completed this four-year, $11.4 million project on time and under budget with increased scope. Initially, CERN requested one magnet, and as the team made considerable progress, the project was expanded to include a second. The magnets were delivered to CERN separately with the second of the two arriving in March 2014. Both magnets are now serving as backups for the collider system.

"Thousands of scientists—more than 1,700 from the United States alone—are eager to study results from particle collisions, and if a magnet now in use should fail, these are on hand to help minimize delays or downtime," said Peter Wanderer, the project manager and head of the Lab's Superconducting Magnet Division. "Being chosen to build magnets that contribute to physics at the LHC is an honor in itself, and we're equally honored to receive this award from Secretary Moniz."

Peter Wanderer, project manager and head of the Superconducting Magnet Division at Brookhaven Lab, describes the process of constructing these two magnets to enhance the reliability of operations at the Large Hadron Collider.

Physicists use results extracted from particle collisions at the LHC to develop a deeper understanding of the basic building blocks of matter in the universe, from new insights into the origin of mass to the nature of dark matter and other fundamental mysteries.

The two cylindrical "dipoles"—designed with the opposing north and south poles running lengthwise within each 32-foot-long magnet—create a magnetic field that steers particles travelling at nearly the speed of light to collide inside one of several large detectors at the LHC. The magnets' internal components must be cooled to temperatures just above absolute zero (-459.67 degrees Fahrenheit) to become "superconducting" and produce magnetic fields strong enough to maintain the particle beams.

Members of the Superconducting Magnet Division completed 20 similar magnets for the LHC in the early 2000s, based on magnets they designed for the Relativistic Heavy Ion Collider (RHIC)—a complementary physics research facility and DOE Office of Science User Facility at Brookhaven Lab.

To complete the two backup dipole magnets, the Superconducting Magnet Division team developed a new method to adjust the magnets' fields much more quickly than previously possible, which contributed to lowering overall production costs. The team also used superconducting cables and low-carbon steel left from the earlier LHC magnet project. They also reused a cryostat—which, like a steel-lined thermos, maintains the magnets' internal components at ultra-cold, superconducting temperatures—from a magnet not in use that CERN sent to Brookhaven. This lead to an additional cost savings of $700,000.

"This team's strengths are rooted in its members," Wanderer said. "With scientists, engineers, and technicians, plus our expertise from building similar magnets for RHIC and the LHC, we strived to make this project a success to support the international collaboration pushing the frontiers science at the LHC."

DOE's Office of Science provided funding for this project.