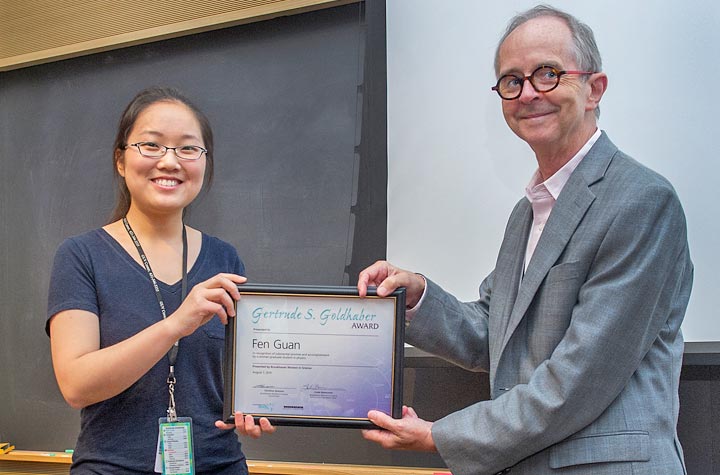 UPTON, NY — Fen Guan, a Stony Brook University (SBU) graduate student, has been awarded the 2015 Gertrude Scharff-Goldhaber Prize, consisting of $1,000 and a certificate. Funded by Brookhaven Science Associates, the company that manages Brookhaven National Laboratory for the U.S. Department of Energy, the award was established in 1992 by Brookhaven Women in Science (BWIS), a nonprofit organization that supports and encourages the advancement of women in science.

The award recognizes substantial promise and accomplishment by female graduate students in physics who are performing their thesis research at Brookhaven Lab, or who are enrolled at SBU. It commemorates the outstanding contributions of the late nuclear physicist Gertrude Scharff-Goldhaber. In 1950, Goldhaber became the first female Ph.D. physicist appointed to the Brookhaven Lab staff. She also was a founding member of BWIS.

Guan's Ph.D. thesis work focuses on strain engineering of graphene and the challenging task of mechanically manipulating graphene while attempting to monitor its transport properties. Graphene, single layers of carbon atoms arranged in a honeycomb lattice (like chicken wire), is considered by some to be a "wonder" material as it is stronger and stiffer than a diamond, but can be stretched like rubber. Its surface area is the largest known for its weight. 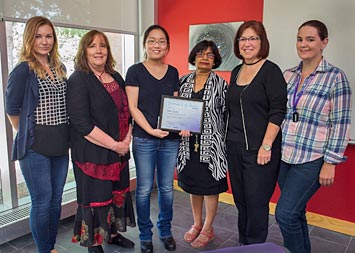 After several attempts using various strain tuning methods, Guan successfully produced flexible graphene nanoelectromechanical resonators — a step toward understanding the fundamental and technical implications of the properties of graphene under strain that may lead to discoveries enabling a new class of nanomechanical devices, including faster computer chips. A portion of Guan's research was conducted at Brookhaven Lab's Center for Functional Nanomaterials.

"I hope my research leads to significant and important discoveries in the field of nanotechnology that will have positive impacts to our society," said Guan. "I am grateful to Brookhaven Women in Science who selected me as the recipient of the 2015 Goldhaber Award, and for the opportunity to be mentored by extraordinary scientists at Stony Brook University."

Fen Guan earned her B. S. in Physics from Zhejiang University. She is currently pursuing her Ph.D. in Physics at Stony Brook University and plans to graduate next year.