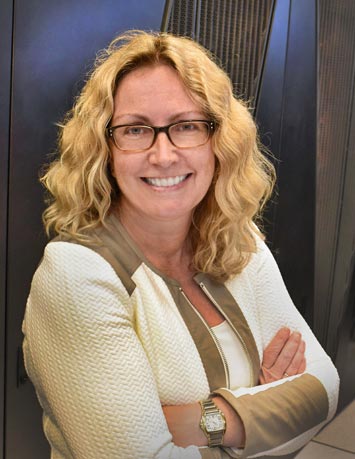 Kleese van Dam will lead CSI, which leverages computational science expertise and investments across multiple programs at Brookhaven Lab—including the flagship facilities that attract thousands of scientific users each year— to tackle the "big data" challenges at the frontiers of scientific discovery. Key partners in this endeavor include nearby universities like Stony Brook, Columbia, Cornell, NYU, and Yale, and companies such as IBM Research.

"I am very excited to join Brookhaven National Laboratory. Advanced data, computing, and modeling approaches have not only the potential to accelerate scientific discovery, but to transform how we do science," said Kleese van Dam. "Through Brookhaven Lab's Computational Science Initiative, we will bring together multi-disciplinary teams from computer science, mathematics and the domain sciences to explore and push these frontiers of science to unlock new discoveries."

Advances in computational science and management of large-scale scientific data developed at Brookhaven Lab are a key factor in the success of the scientific programs at its Relativistic Heavy Ion Collider, National Synchrotron Light Source II, and Center for Functional Nanomaterials—all DOE Office of Science User Facilities—and in biological, atmospheric, and energy systems science. These capabilities have also been a crucial part of the Lab's participation in international research collaborations like the ATLAS experiment at Europe's Large Hadron Collider.

The CSI will bring together under one umbrella the expertise that fosters cross-disciplinary collaboration and makes optimal use of existing technologies, while also leading the development of new tools and methods that will benefit science both within and beyond the Laboratory.

"A centerpiece of this initiative will be the new Center for Data-Driven Discovery, led by Robert Harrison, which will drive the integration of intellectual, programmatic, and data/computational infrastructure, accelerating and expanding discovery and focusing the tools and capabilities across the entire Laboratory into a single scientific resource," said Bob Tribble, Brookhaven's Deputy Director for Science & Technology.  "We're delighted that Kerstin is joining the Lab's leadership team and we're very much looking forward to her leading our Laboratory-wide computing effort."

With more than 25 years' experience in the field, Kleese van Dam comes to Brookhaven from Pacific Northwest National Lab (PNNL) in Richland, WA, where she most recently served as Associate Division Director of the Computational Science and Mathematics Division, as well as Chief Scientist and Lead of Data Services. Her responsibilities included a wide range of data management research and development projects in applied computer science research. She also led the creation of a data analysis thrust area in PNNL's Chemical Imaging Initiative. In 2014, she and her colleague Bill Pike established a new five-year research initiative on streaming analysis (called Analysis in Motion) for a variety of application areas including experimental science.

Kleese van Dam worked at the Science & Technology Facilities Council's (STFC) Daresbury Laboratory, United Kingdom from 1997 to 2008. At STFC, she contributed to the National High Performance Computing Initiative both as application expert and coordinator. She later co-founded the STFC e-Science Centre and built the organization's scientific data management program. As part of this effort, she led the development of the scientific data management infrastructure for STFC's ISIS neutron facility and Diamond Light Source. In addition she led and participated in a wide range of national and international projects.

After leaving STFC, Kleese van Dam worked as an IT business consultant before accepting a position as Director of Computing for the Biomedical Sciences Faculty at University College London. In October 2009, she joined PNNL as senior research scientist.

Kleese van Dam has co-authored more than 100 publications. She is a member of the DOE Advanced Scientific Computing Research Advisory Committee's standing subcommittee on Science, Technology and Information. Kleese van Dam regularly co-organizes and is invited to participate in DOE Office of Science workshops and meetings.